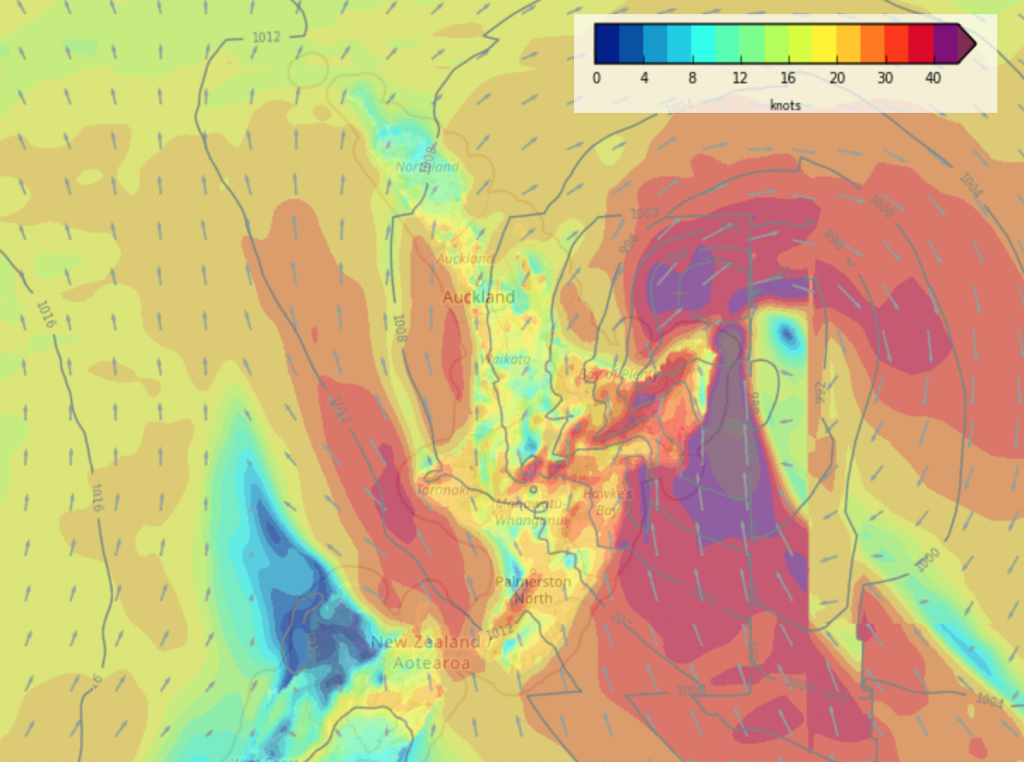 We have strong winds and potentially heavy rain in a few other North Island regions but north of Napier in the east as mentioned above gets hardest hit. Heavy southerly swells can be expected in the east today also especially later on and overnight.

MUCH MORE SETTLED TOMORROW, MAYBE EVEN A LIGHT FROST INLAND

The weather calms down dramatically tomorrow as high pressure moves in, as far as the North Island is concerned at least. Winds may be gale force first thing in the morning for coastal Hawkes Bay / Gisborne but these winds will ease. The South Island has a settled day, inland areas may see a light frost first thing in sheltered spots.

HIGH PRESSURE HANGING AROUND FOR EASTER, BUT IT’S NOT PERFECT EVERYWHERE

There is quite a bit of high pressure hanging around this easter meaning on the whole conditions are looking fairly settled. However, we have a cold front to deal with on Saturday and some regions have cloud and or a few showers at times. Below is the forecast for Easter 2022.


Friday is mostly sunny for most, there may be some morning cloud for the eastern North Island but this breaks away. Also there could be some cloud at times for western regions but still areas of sun too. Just southern Fiordland has a few showers and this spreads a little further northwards overnight.

Saturday has a cold front push northwards over the South Island, this does bring rain in the west but the front weakens as it moves through. Showers about the far south ease then some cloud builds in the east with southerlies, a few light showers possible for Canterbury north of Banks Peninsula later in the day. The North Island is largely settled and mostly sunny, some cloud in the west breaks to afternoon sun then in the evening southerlies move into the lower North Island and up the east coast overnight bringing in a few light showers.

Sunday is a little cloudy in the east, maybe even a light shower or two. The western North Island has some sun / cloud, East Cape through to Northland has some cloud, the odd shower and easterlies. The interior of the South Island and far south has a mostly sunny day. Some cloud possible for the West Coast with the chance of a light shower north of about Greymouth.

The eastern North Island is a little cloudy on Monday, a mix of sun and cloud out west. North of Coromandel and Auckland has showers with easterlies. Any morning cloud in the east and west of the South Island clears then mostly sunny. Some cloud for Fiordland may bring a few showers especially later. A touch of high cloud lies across the lower South Island also ahead of a front that lies to the southwest.