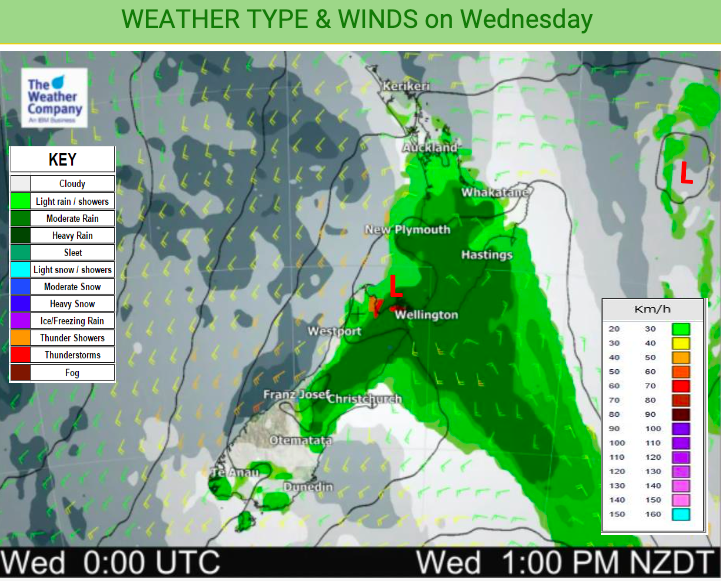 A spring surge of cooler air is spreading into the south and east of both islands today, dropping temperatures a little further and pushing showers northwards.

Only a few showers will make it into the very north of NZ today and it’s a similar story in the south of the South Island.

In the middle/central part of NZ rainfall totals are higher with 5 to 20mm possible – and up in the ranges add another 10 to 20mm more to that.

Windy weather will continue in Southland and coastal Otago, and a large portion of the North Island will get a surge of winds too, although nothing too serious at this stage.

Overnight tonight that cooler air will bring a colder than average night to almost the entire North Island.

Northland, Auckland, Waikato & Bay Of Plenty
A mix of sun and cloud and mostly dry, but the chance of cloud and showers increases the further south you are. Highest chance for wet weather in Waikato. NW Winds picking up.
Highs: 17 – 26

Eastern North Island
Rain clouds developing in the south, like around Wairarapa in particular. Showers or some areas of rain may move further north. Totals are higher the further south you go. Hottest inland from Gisborne. Nor’westers for most.
Highs: 18 – 28

Wellington
Rain developing and setting in with around 20mm forecast. Southerlies kicking in later.
High: 16 or 17

Marlborough & Nelson
Areas of rain developing with a few heavier falls on the Nelson side. Variable winds with a S to SE winds developing later.
Highs: 15 – 18

Canterbury
A much cooler day then showers or patchy rain, with a higher chance of wet weather through inland North Canterbury. E to SE winds.
Highs: 12-17

West Coast
Rain moving into the upper half of the West Coast and then clearing to showers and increasing dry spells and dry by midnight. Brisk W to SW winds.
Highs: 16 or 17