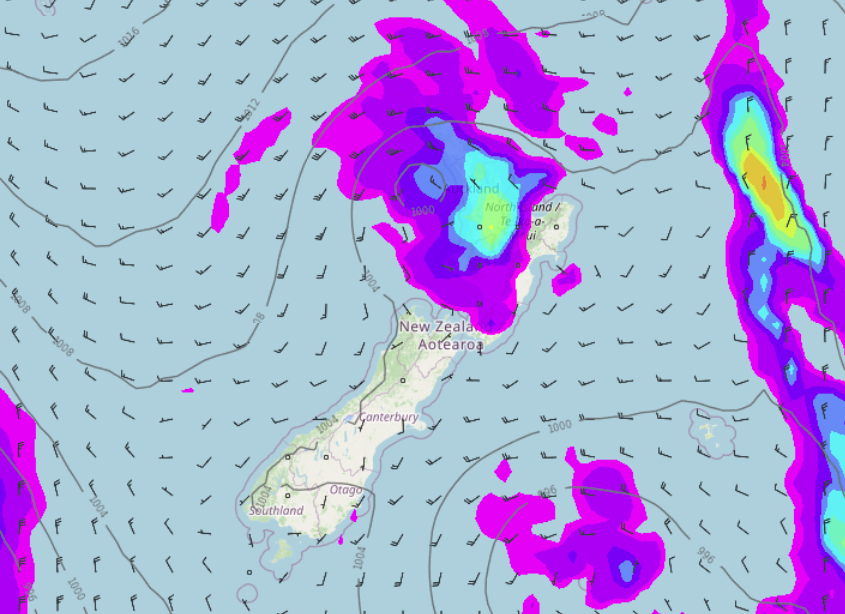 The South Island sees a few clearing showers about the place today otherwise it’s mainly dry, the North Island on the other hand has heavy showers and possible thunderstorms with hail for western regions. These clear away this evening, the east coast sees a few showers also.

No particularly strong winds today although about northern Northland westerlies become a little gusty then changing southwest this evening. Temperatures in the late teens or early twenties for most, mid teens for some inland areas.

Northland, Auckland, Waikato & Bay Of Plenty
There may be a few morning sunny spells, the odd shower too. A sunny and dry morning likely for the Bay Of Plenty. Cloud thickening up with showers becoming heavy with thunderstorms in the afternoon, clearing evening as northwesterlies change southwest.
Highs: 18-20

Western North Island (including Central North Island)
Showers develop during the morning, chance of an isolated heavy fall with thunder from midday (especially the further north you go) then clearing up late afternoon. Northwesterlies change to the south in the afternoon.
Highs: 14-19

Eastern North Island
Mostly sunny, afternoon showers develop with a southerly change then clearing up in the evening.
Highs: 18-22

Wellington
Morning showers as northwesterlies change to the south, becoming mostly sunny in the afternoon.
Highs: 16-17

Canterbury
Any early showers clear, sunny spells then increase with southwesterlies dying out in the evening.
Highs: 19-20

West Coast
Mostly sunny with winds tending southwest by midday, later in the evening or overnight cloud thickens with showers moving in.
Highs: 17-19

Southland & Otago
Showers ease clearing in the afternoon for Southland and coastal Otago, mostly cloudy but some sun may break through after showers clear. Central Otago sees morning cloud then mostly sunny. Southwesterlies die out in the evening.
Highs: 14-18