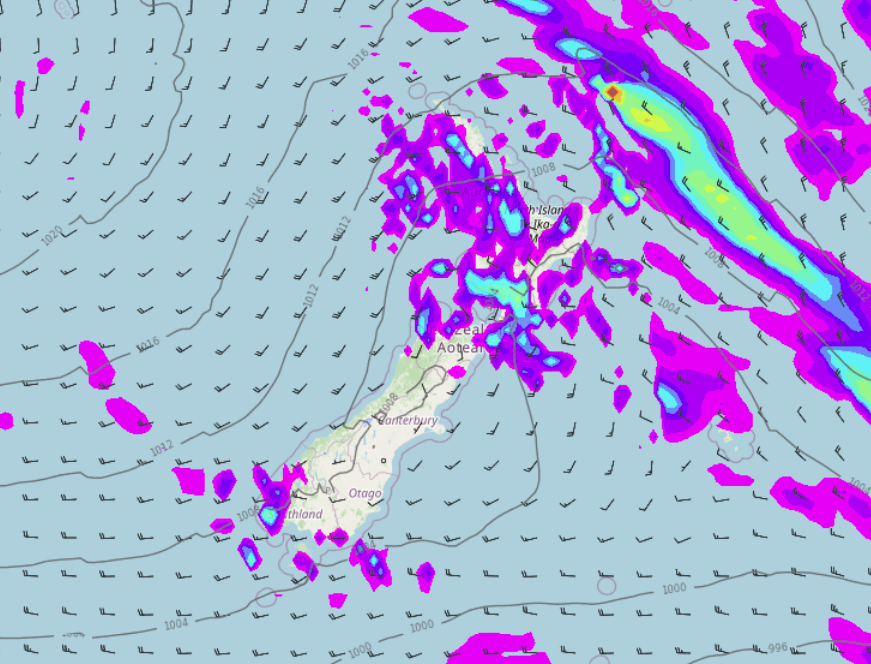 Unsettled for the North Island today with showers, showers may be heavy with hail and perhaps even a thunderstorm, these showers are supported by some very cold air in the upper atmosphere. The South Island sees easing conditions with showers about the upper half gradually clearing from the south during the day.

Northland, Auckland, Waikato & Bay Of Plenty
Showers, some may be heavy with thunderstorms and hail, northwesterlies change southwest in the afternoon. Showers clear overnight for most but the odd one remaining out west.
Highs: 13-15

Eastern North Island
Some high cloud, a few spots of rain for Wairarapa. Late morning southwesterlies push into Wairarapa bringing showers, perhaps a chance of an isolated heavy fall and some hail then clearing in the evening. A southwest change for Hawkes Bay and Gisborne late afternoon / evening brings a few showers.
Highs: 12-16

Marlborough & Nelson
A few early spits of rain, isolated afternoon showers, possibly heavy with a risk of hail, maybe even the low risk of a thunderstorm then clearing mid to late afternoon. Some sun once showers clear. Northwesterlies change to the south late morning.
Highs: 9-14

West Coast
Mostly sunny, showers Greymouth northwards ease during the morning then a few afternoon sunny spells break through. Fiordland has a few showers especially in the south. Cloud thickens overnight with showers moving back in for most. Southwesterly winds.
Highs: 8-12

Southland & Otago
Cloudy areas and a shower or two for Southland, clearing at night. Otago has early cloud clear then mostly sunny. Westerly winds, breezy about the coast.
Highs: 9-11