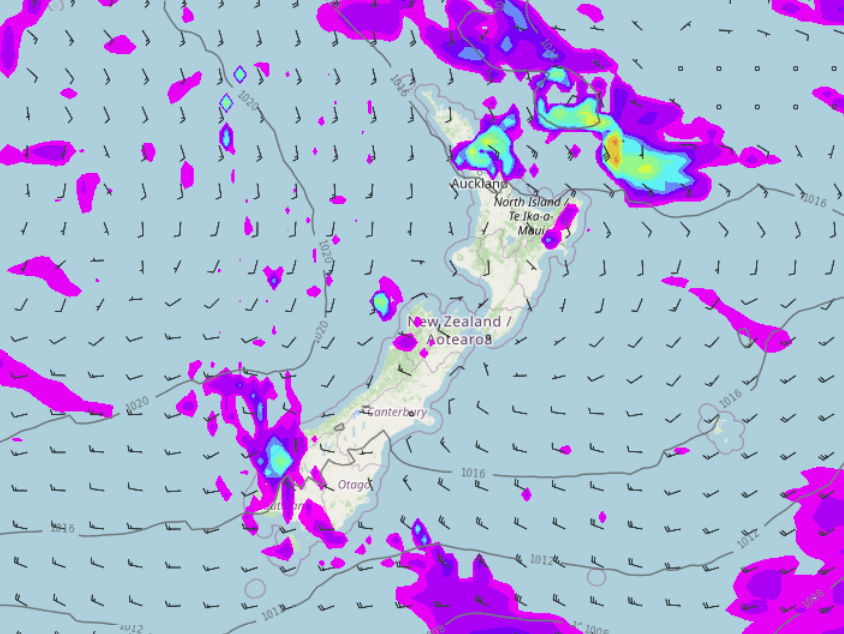 A trough slides past some northeastern parts of the North Island today meanwhile the rest of the country is under a ridge of high pressure, a weakening cold front gradually moves into the far south.

Most places around New Zealand are dry today but we do have a few showers about due to a few small features, more details in the forecasts below.

Northland, Auckland, Waikato & Bay Of Plenty
A mix of sun and cloud, north of Auckland skies may be a little cloudier with a few showers during the day. Bay Of Plenty could see a few coastal morning showers then afternoon showers for Coromandel and Great Barrier Island. Southerly winds north of Auckland, southeasterlies to the south.
Highs: 16-18

Western North Island (including Central North Island)
Some morning cloud clears then sunny, southeasterlies die away during the morning.
Highs: 12-17

Eastern North Island
Cloud breaks to increasing sunny areas from morning about Wairarapa, further north showers clear Hawkes Bay first thing then Gisborne in the afternoon, once showers clear sun starts to break through. Southwesterlies ease then tending to the east or northeast in the afternoon.
Highs: 13-16

Wellington
Morning cloud then becoming mostly sunny in the afternoon, a cold start inland. Light winds tending to the north after midday.
Highs: 14-15

Marlborough & Nelson
Morning cloud then mostly sunny, there may be a few morning showers about the northwest Nelson ranges areas then clearing. Light winds tend to the north in the afternoon.
Highs: 14-15

West Coast
A mix of sun and cloud, down towards Fiordland expect increasing cloud and a few showers from afternoon. There may be a few morning showers for Buller then clearing away. Light winds.
Highs: 12-15

Southland & Otago
Increasing cloud for Southland, showers from around midday. Otago has a mix of sun and cloud, a frosty start inland. Northwesterlies tend westerly in the afternoon about coastal parts.
Highs: 13-16