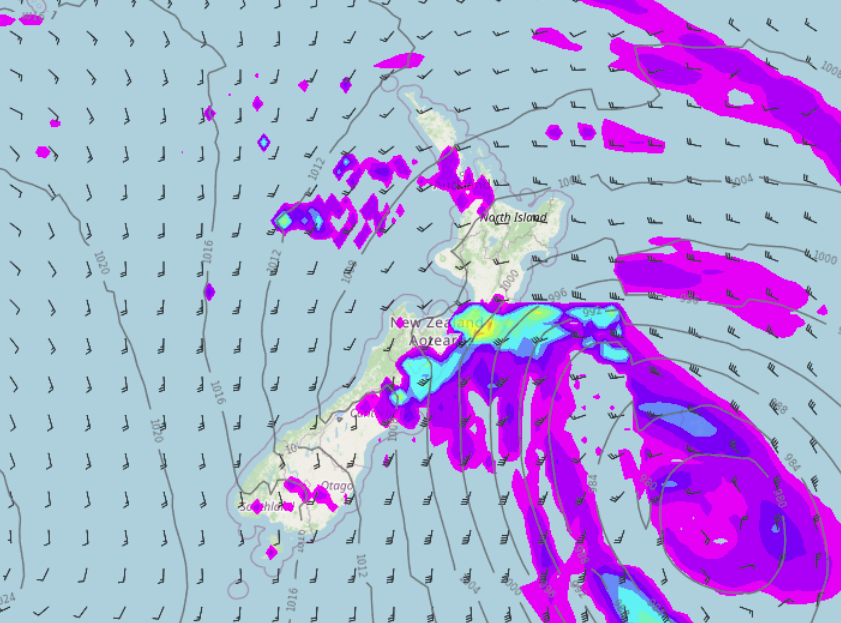 A southwesterly airflow lies over New Zealand today, gales for some eastern coastal areas. Most regions see rain or showers atleast for a time, the West Coast and Nelson stays sunny and dry all day though.

Eastern North Island
Showers south of about Napier, some sun further north. Showers becoming more intense perhaps turning to rain in the afternoon for Wairarapa then moving north in the evening. Southwesterlies strengthen from afternoon with gales developing about coastal parts.
Highs: 11-16

Marlborough & Nelson
Any early showers clear Nelson and about the Sounds then sunny spells break through, showers for southern Marlborough pick up in the afternoon then easing in the evening, showers clear at night. Snow flurries to 600m. Southerlies strengthen about the coast in the afternoon then easing overnight.
Highs: 11-16

Canterbury
Rain for Mid and especially North Canterbury then easing from afternoon back to showers, South Canterbury looks to have a few showers now and then. Snow flurries to 600m, perhaps down to 400m for a time in the morning about South Canterbury. Southwesterly winds strong about the coast with gales, easing from evening.
Highs: 9-12

West Coast
Mostly sunny with southeasterlies, winds may tend more to the south for a time in the afternoon.
Highs: 14-15

Southland & Otago
Showers ease during the day, mostly clearing by evening but a few remain about the coast. Snow flurries to 400m. Sunny spells break through at times. Southwesterlies (strong about coastal Otago) die out later in the day.
Highs: 9-11