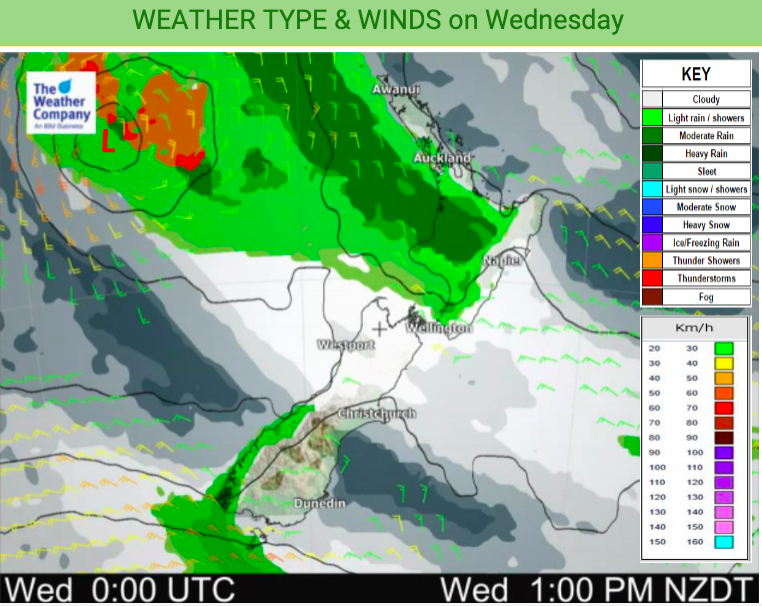 A trough, or the beginnings of a weak low, will form just to the north west of NZ today and will connect to an area of sub-tropical winds pushing down over the upper North Island.

Most of New Zealand will be warmer than average today with the upper and eastern North Island having another warm night tonight with overnight lows hovering around the late teens, even 20 degrees.

A cooler night is coming for the deep south though.

Rain clouds are most likely along the western and very northern North Island.

This trough, or small weak low, will then cross over the North Island on Thursday bringing additional downpours of rain before clearing in the afternoon and evening.

Northland, Auckland, Waikato & Bay Of Plenty
Fairly cloudy, especially in the west, with showers and areas of patchy rain. Rain may be most likely across King Country, Taupo and Bay of Plenty with perhaps Auckland one of the drier areas. Some heavier falls possible around King Country and the Far North. Hottest in Whangarei, cooler further south you head.
Highs: 20-28

Western North Island (including Central North Island)
Cloudy with areas of rain and showers and some heavy falls around New Plymouth and Mt Taranaki. Nor’Westers for most.
Highs: 18-21

Eastern North Island
Some rain clouds will spillover from the west in to Wairarapa and maybe Hawke’s Bay, otherwise fairly dry. Warm NW winds continue. A warm night for many tonight with some now dropping below 20 degrees, like in northern Hawke’s Bay.
Highs: 21-30

Wellington
Brisk northerlies with a few showers possible, may turn to rain the further north from the city you are.
High: 18 – 20

Canterbury
Cooler in the mountains but milder on the plains and coastal areas. A mix of sun and cloud with NW winds continuing.
Highs: 17 – 28

West Coast
Becoming mostly dry, might be a remaining shower. West to NW winds.
Highs: 17 to 20

Southland & Otago
A few showers possible otherwise a mainly dry for most with nor’westers continuing.
Highs: 15-22