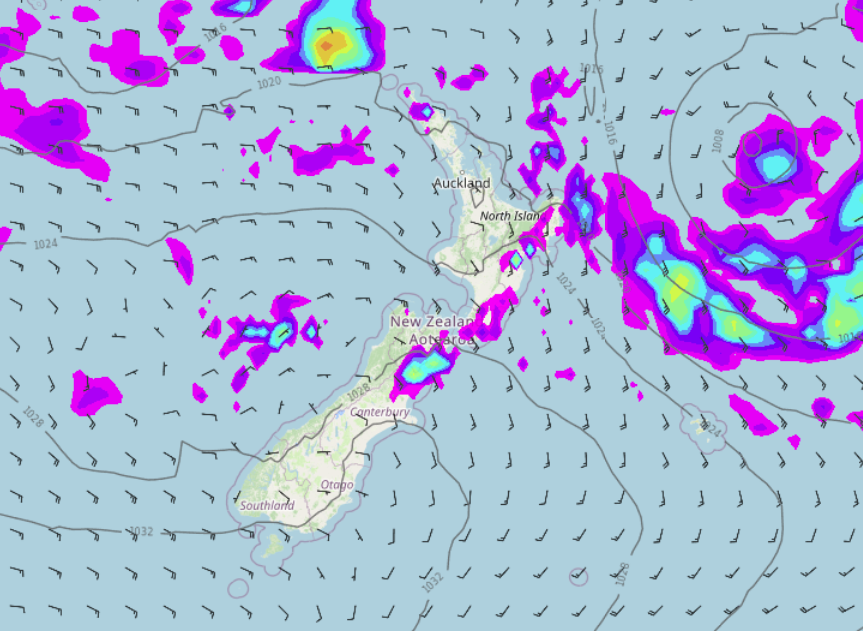 A southeasterly airflow lies over New Zealand today with an anticyclone starting to nudge in over the South Island, showers for some in the east and drier out west overall.

Northland, Auckland, Waikato & Bay Of Plenty
Mainly sunny with a few clouds here and there, light southeasterlies. Winds may tend onshore in the afternoon then reverting back to the southeast at night. Northern Northland may see a few showers from afternoon.
Highs: 22-26

Western North Island (including Central North Island)
A mix of sun and cloud, the Central Plateau has cloudier skies with the odd shower passing over from the east. Southeasterly winds. Taranaki is mostly sunny with breezy southeasterlies, especially about the southern coastline.
Highs: 15-23

Marlborough & Nelson
Marlborough has cloudy areas and a few showers, especially later in the day, breezy east to southeasterly winds. Nelson is dry with sunny spells, winds are lighter, tending northerly for a time in the afternoon.
Highs: 18-22

West Coast
Mostly sunny, some cloud at times for South Westland and Buller with a coastal shower or two possible. Southeasterly winds may tend onshore in the afternoon along the coastal fringe.
Highs: 19-23

Southland & Otago
Morning cloud breaks to sunny spells, it may become mostly sunny in the afternoon for Southland. East to southeasterly winds.
Highs: 14-18