Wednesday’s national forecast – Settled but cloudy for some (+11 maps) 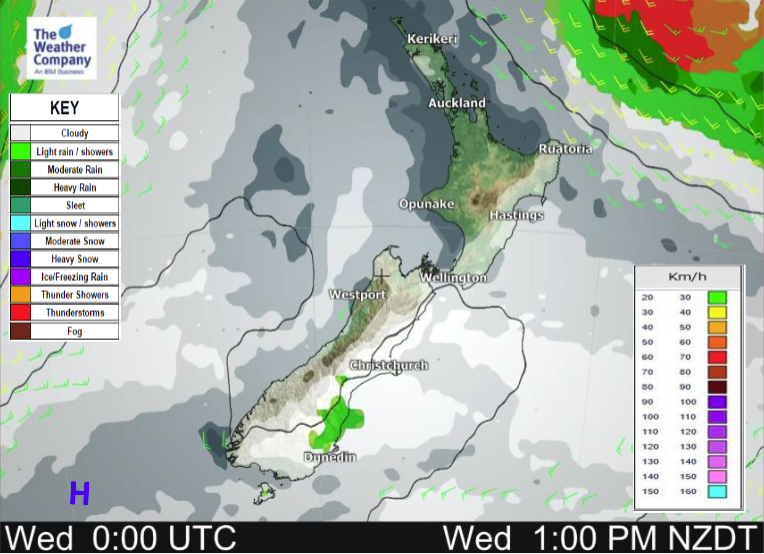 A high pressure system brings mainly settled weather today but there is quite a bit of cloud about for some regions, perhaps the odd shower or drizzle patch too. Winds are fairly light and temperatures in the late teens or early twenties for most.

Western North Island (including Central North Island)
Mostly sunny, there may be a few clouds at times. Light winds tend south to southeasterly in the afternoon. Afternoon westerlies possible for northern Taranaki.
Highs: 19-22

Eastern North Island
Some cloud about Wairarapa, spreading further northwards later in the afternoon / evening. Some drizzle or a light shower or two moves in as cloud thickens. Mostly sunny before cloud moves in. Southeasterlies.
Highs: 19-21

Wellington
A mix of sun and cloud, cloud more likely in the east, sunnier in the west. Southeasterly winds.
Highs: 18-22

Marlborough & Nelson
A chance of some morning sun then becoming cloudy, light winds tend easterly in the afternoon for Marlborough, afternoon northerlies for Nelson.
Highs: 18-20

Canterbury
Mostly cloudy with a few showers or drizzle patches, skies may dry out in the afternoon for Mid and North Canterbury. East to northeasterly winds.
Highs: 17-21

Southland & Otago
Chance of a morning drizzle patch for Southland, skies are quite cloudy but some sun may break through from afternoon. Otago has mostly cloudy skies all day, the odd shower or drizzle patch too especially morning. Light winds from the southerly quarter.
Highs: 16-19