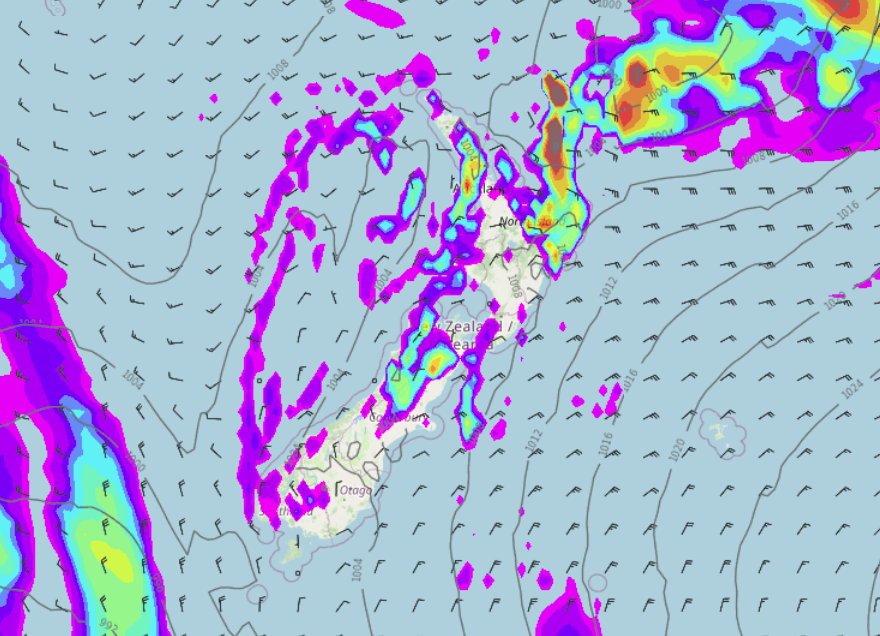 Low pressure sits to our west and northeast today, more showers are on the way for many regions, possibly a thunderstorm or two. Some heavy rain for northeastern parts of the North Island.

Northland, Auckland, Waikato & Bay Of Plenty
Mostly cloudy with showers, isolated heavy falls and thunder possible too especially afternoon then easing in the evening. Remaining showers clear at night as easterly quarter winds swing around to the south. Rain may be heavy for eastern Bay Of Plenty.
Highs: 23-25

Western North Island (including Central North Island)
Showers or some rain, chance of the odd isolated heavy fall and maybe some thunder, clearing overnight although rain may still reach into the Central Plateau pushing over from the east. Easterly winds.
Highs: 18-23

Marlborough & Nelson
Mostly cloudy with occasional showers or some rain, clearing in the evening. Light north to northeasterly winds.
Highs: 20-22

Canterbury
Morning low cloud or fog then breaking to sunny spells, a few isolated showers develop in the afternoon mainly inland then clearing in the evening. East to northeasterly winds.
Highs: 20-24

West Coast
Morning cloud breaks to a few sunny spells, north of about Greymouth expect the odd shower then late afternoon or early evening a few isolated showers spring up elsewhere. Overnight rain for Fiordland as a front moves in. Winds are mostly light tending north to northeast in the afternoon.
Highs: 23-26

Southland & Otago
There may be some low cloud or fog to start then sunny with light winds. Coastal Otago continues to see some cloud at times for much of the day with northeasterlies. Overnight a westerly change for Southland brings some rain.
Highs: 22-26