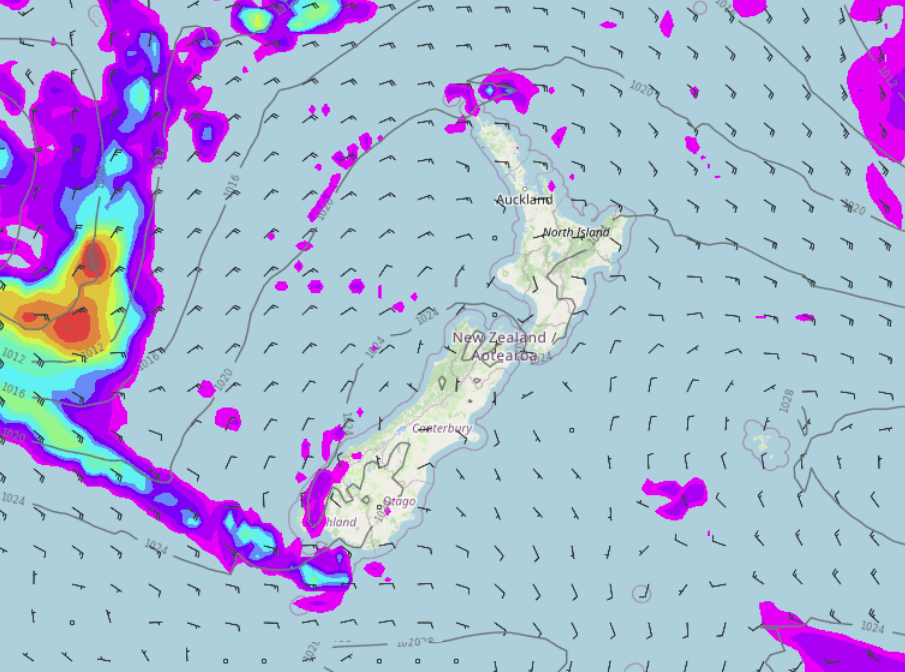 Conditions are mainly settled today thanks to a ridge of high pressure, a front lying across the lower South Island brings some cloud and a few light showers. Cloud sneaks up the east coast into Canterbury also.

Northland, Auckland, Waikato & Bay Of Plenty
A mix of sun and cloud, morning fog possible for the Waikato then clearing. A shower or two in the east from Coromandel up through to eastern Northland. East to northeasterly winds.
Highs: 24-27

Western North Island (including Central North Island)
Low cloud or fog (mainly inland) breaks away then mostly sunny, some cloud builds inland during the afternoon about inland hills / ranges. There may also be a light morning shower for New Plymouth then clearing to sunny areas after midday. Light winds tend onshore in the afternoon.
Highs: 22-26

Eastern North Island
A mix of sun and cloud with east to northeasterly winds.
Highs: 22-26

Wellington
A mainly sunny day after any morning cloud clears, light northerlies tend to the south later in the day.
Highs: 22-26

Canterbury
Some cloud thickening up south of Banks Peninsula in the morning then further north from afternoon with southerly winds, some sun before cloud moves in. Staying mainly dry but there could be a drizzle patch up against the foothills for a time.
Highs: 20-25

West Coast
Mostly sunny, a touch of high cloud, perhaps some morning mid level cloud then breaking away (morning fog for inland Buller). There may be a light shower or two for Southern Fiordland. Light winds.
Highs: 21-27

Southland & Otago
A few light morning showers clear away for Southland, a mostly cloudy day but sun may briefly break through in the afternoon. Inland areas have a mix of sun and cloud with warm temperatures. Southerlies tend to the east after midday.
Highs: 16-26