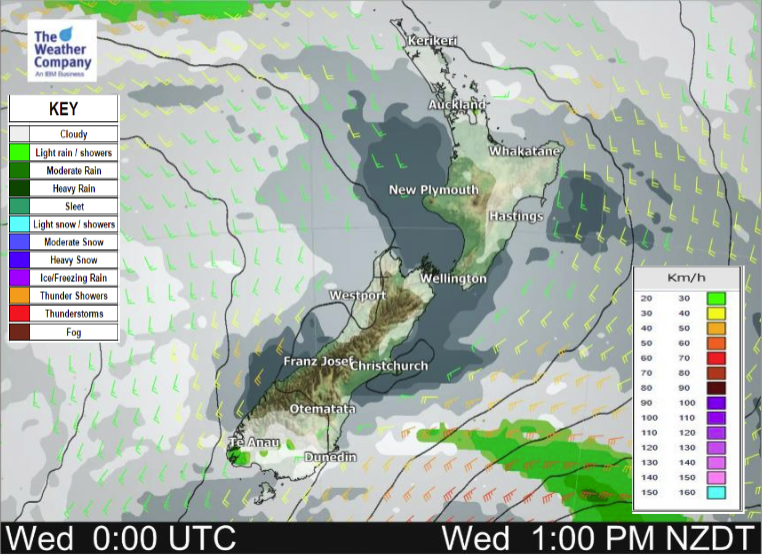 A ridge of high pressure brings mainly settled weather to New Zealand today, there may still be a shower or two about though.

Showers clear Hawkes Bay and Gisborne this morning, chance of a shower this afternoon Coromandel northwards. A few light showers about the far south move into Canterbury this evening then the eastern North Island overnight.

Temperatures in the late teens or early twenties for most, perhaps mid twenties for inland Northland this afternoon.

Winds are light to moderate for most, perhaps becoming breezy this afternoon about the eastern South Island as southerlies freshen.

Northland, Auckland, Waikato & Bay Of Plenty
Cloud first then then breaking to sunny spells, cloud increases in the afternoon bringing the risk of a few showers as light winds tend to the east.
Highs: 22-24

Wellington
Mostly sunny, there may be some cloud at times. Southeasterly winds.
Highs: 18-20

Canterbury
Morning cloud then sunny areas increase in the afternoon, cloud moves back in again in the evening. Chance of an overnight shower or drizzle patch. Light winds tend to the south this afternoon.
Highs: 19-20

West Coast
Sunny with light winds, there may be some coastal cloud mainly morning then breaking away.
Highs: 18-22

Southland & Otago
Cloud and a few showers moves in during the morning for Southland as westerlies change southwest, sunny spells start to break through again from afternoon with showers clearing away. Otago has a mostly sunny morning then some cloud and the risk of a shower in the afternoon.
Highs: 14-18