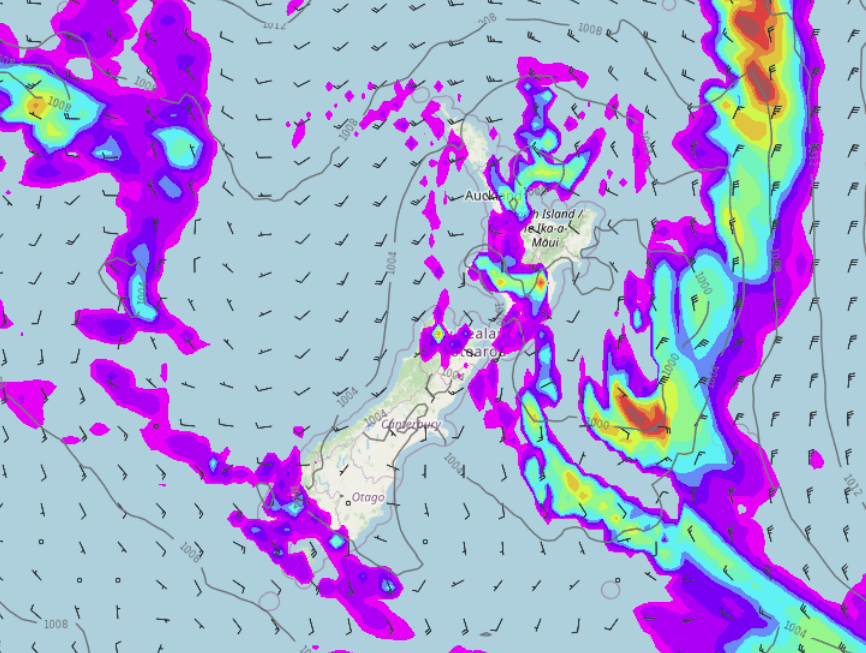 A low pressure system crosses over the North Island today moving in a west to east fashion, conditions are more settled over the South Island.

Most North Island regions see showers today, rain this morning in the northeast may be heavy, clearing around midday. The South Island is mainly dry, just a few showers in the north and far south. Temperatures in the late teens or early twenties for most, warmest overall for the upper and eastern North Island.

Winds are light to moderate for most, south to southwesterly winds about the lower / eastern North Island freshen up a bit though.

Northland, Auckland, Waikato & Bay Of Plenty
Some cloud, there may be a shower. Morning heavy rain about Waikato then Bay Of Plenty clears away. Showers pick up in the afternoon as light winds change southwest, there may be an isolated heavy fall then clearing evening although the odd shower lingers about western Waikato through to Northland through the night.
Highs: 20-22

Western North Island (including Central North Island)
A few morning showers clear, sunny spells may break through. In the afternoon expect further showers for a time (perhaps even an isolated heavy fall / thunderstorm) as light winds tend to the southwest.
Highs: 17-21

Wellington
Mostly cloudy with the odd shower, clearing later in the afternoon. Southerly winds develop in the morning.
Highs: 17-20

Marlborough & Nelson
Morning showers clear, a few sunny spells may start to break through from afternoon. There may be an isolated shower inland about the ranges in the afternoon for a time. Southerlies tend north to northeast in the afternoon.
Highs: 17-19

West Coast
Morning cloud (morning showers for Buller) then mostly sunny with southwesterlies. Fiordland sees showers in the south then clearing later in the day.
Highs: 17-19