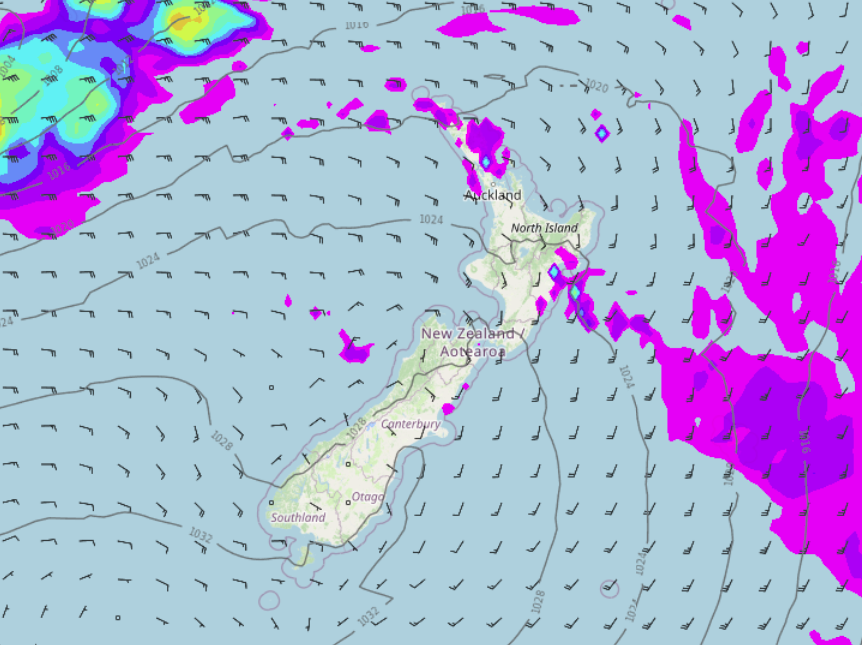 An anticyclone is starting to push in over the South Island today meanwhile the North Island has a southerly quarter airflow with showers in the east, a few showers also moving through Waikato northwards with easterlies.

Western North Island (including Central North Island)
Mostly sunny, there may be some cloud for a time in the afternoon. Southeasterly winds, freshening up for Taranaki especially in the south.
Highs: 18-24

Eastern North Island
There may be some morning sun, a shower or two north of Napier. In the morning southerlies freshen about Wairarapa bringing thickening cloud and showers then moving north after midday. Showers clear Wairarapa in the evening, elsewhere overnight.
Highs: 18-21

Wellington
Southerlies freshen in the morning bringing a few showers, clearing in the afternoon and sunny spells break through.
Highs: 17-19

Marlborough & Nelson
Partly cloudy, a shower or two about southern Marlborough clears in the evening. East to southeasterly winds, fresh about the Sounds and Farwell Spit. Afternoon northerlies for Nelson.
Highs: 18-22

Canterbury
A few light showers, clearing in the afternoon although one or two may hang about Kaikoura till evening. A bit of a cloudy day with some sun possible before dusk. The Mackenzie Country should see afternoon sun though. Southwesterlies die out later in the day.
Highs: 18-23