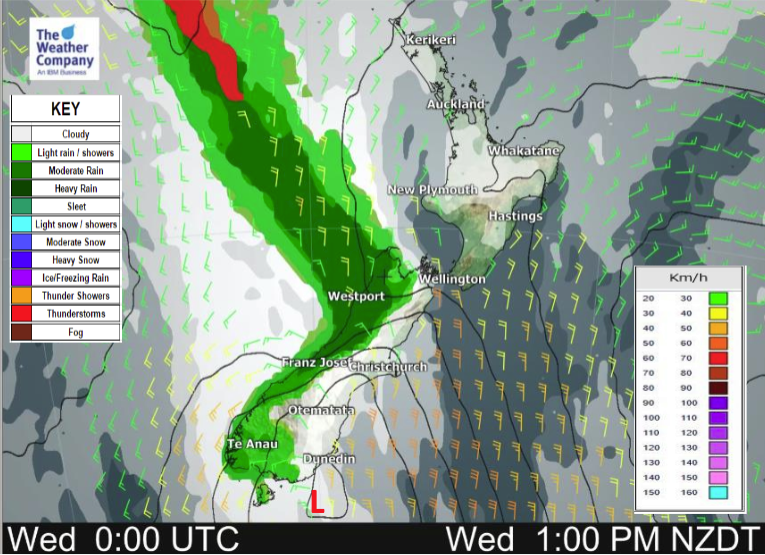 The odd shower continues for northeastern parts of the North Island today, rain for the West Coast and some parts of the far south.

Warm temperatures for most but becoming cool about the far south with southwesterlies.

Blustery northerlies for the South Island ease across the course of the afternoon / evening from the south.

Northland, Auckland, Waikato & Bay Of Plenty
Cloudy areas and a light shower or two, showers less likely into the afternoon and some sun breaks through at times but some spots especially Bay Of Plenty may stay mostly cloudy all day. Northeasterly winds.
Highs: 24-26

Western North Island (including Central North Island)
Mostly sunny, there may be some cloud at times for Taranaki and Kapiti. Northerly winds, tending westerly in the afternoon for Manawatu.
Highs: 22-27

Canterbury
Mostly sunny, some high cloud. Rain in the high country may be heavy then easing / clearing up during the afternoon. Gusty north to northwesterly winds change southerly in the evening, overnight drizzle.
Highs: 27-30

West Coast
Rain, possibly heavy then easing to showers in the afternoon as breezy northerlies changing southwest. Rain may continue to be a bit more persistent for the rest of the day about Buller.
Highs: 18-20

Southland & Otago
North to northwesterly winds, changing southwest in the morning about Southland then spreading into Otago during the afternoon. Some morning rain although coastal Otago may stay dry, showers clear in the afternoon and there may be some sun late in the day before dusk.
Highs: 17-25