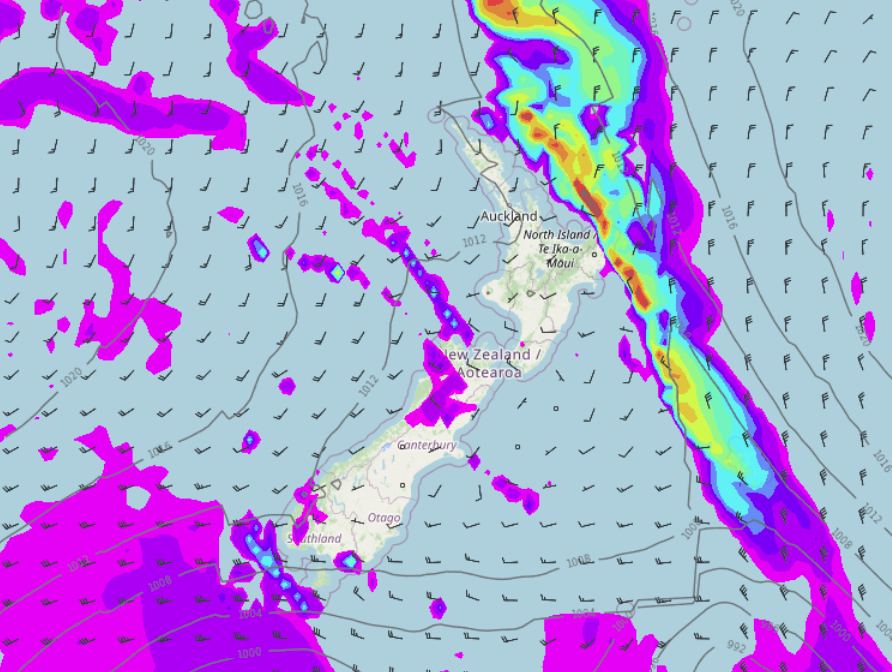 An occluded front moves off to the northeast of the North Island this afternoon leaving a cold southwesterly airflow in its wake.

Most regions will see rain or showers today, some snow about the ranges of the South Island too (for more details see forecast below).

Northland, Auckland, Waikato & Bay Of Plenty
Early rain, possibly heavy then expect partly cloudy skies and the risk of a shower, winds change southwest in the morning. About Bay Of Plenty rain doesn’t clear till afternoon then some sun breaks through.
Highs: 15-17

Eastern North Island
Morning rain for Wairarapa and Hawkes Bay then just a shower or two for the rest of the day, rain doesn’t ease for Gisborne till afternoon. Northerlies change southwest.
Highs: 15-17

Wellington
Rain before dawn clears then some sun breaks through with winds tending to the south in the morning, there is the risk of a shower at times otherwise mainly dry. In the evening there is a greater risk of a few showers as cloud thickens.
Highs: 13-15

Canterbury
Showers or areas of rain, easing from afternoon and clearing by evening. Snow to 700m for northern parts of the region, down to 400m in the south. Southwesterlies die out later in the day.
Highs: 7-9

Southland & Otago
Morning showers and snow to 300m clears then sunny spells increase, the odd shower may remain about coastal Southland for the rest of the day. Southwesterlies tend to the west or northwest in the afternoon.
Highs: 6-8