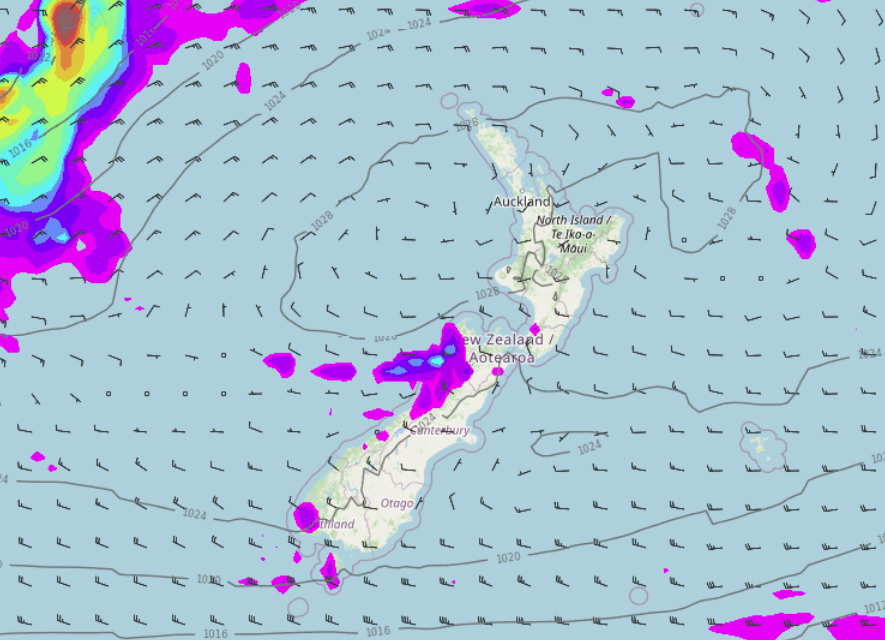 A front fizzles out over the South Island today with high pressure regaining control over much of the country.

Mainly dry for most regions today, showers for the West Coast do ease, mostly clearing this evening. For the North Island only Kapiti has the risk of a shower. Temperatures in the east and about parts of the upper North Island get into the early twenties this afternoon, winds are light to moderate for most although westerlies through the Southern Alps could be a little breezy.

Northland, Auckland, Waikato & Bay Of Plenty
Mostly sunny, south of about Auckland through to Waikato expect some cloud at times in the west. Light winds pick up a touch from the southwest in the afternoon.
Highs: 19-21

Marlborough & Nelson
Sunny, west to northwesterly winds for Marlborough. Southwesterlies for much of the day in Nelson.
Highs: 20-23

Canterbury
Mostly sunny, there may be a touch of high cloud. Light northwesterlies, tending onshore in the afternoon near the coast.
Highs: 17-22

West Coast
Early rain eases to showers, clearing evening. Some sun may break through from afternoon. Westerlies tend to the southwest in the afternoon.
Highs: 15-17