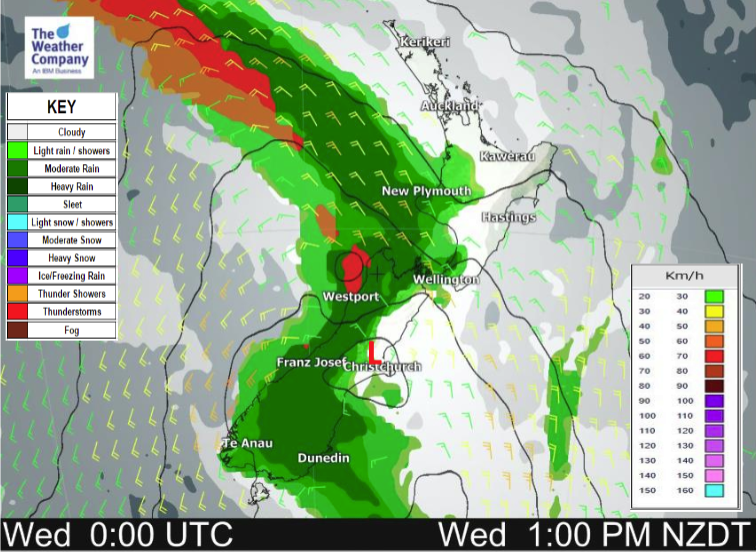 A low pressure system and associated cold front moves onto the South Island today from the west, pushing into the western North Island this evening.

Most regions can expect rain or showers at some point apart from Hawkes Bay and Gisborne.

Temperatures starting to cool down for the South Island as cold front moves in.

Strong northerlies through Cook Strait, changing southerly this evening. Southwesterlies may be a little blustery about the eastern South Island for a time this afternoon / evening then easing overnight.

Northland, Auckland, Waikato & Bay Of Plenty
Sunny spells, risk of a light shower out west. Cloud thickens up in the afternoon then some rain moves in from the west late afternoon or evening. Northwesterly winds.
Highs: 22-23

Western North Island (including Central North Island)
Cloudy or becoming mostly cloudy in the morning, a light shower or two for Kapiti and Taranaki. Some rain moves in during the afternoon, more persistent about Taranaki. Northwesterlies change southerly overnight.
Highs: 18-22

Wellington
Cloudy, risk of a shower about Upper Hutt. Some scattered rain moves in during the afternoon, easing overnight to showers as gusty northerlies change southerly.
High: 19-20

Canterbury
High cloud, northerly winds then southwesterlies freshen during the afternoon. Showers then rain moving into South Canterbury from afternoon, further north in the evening. Conditions ease from the south overnight.
Highs: 18-24