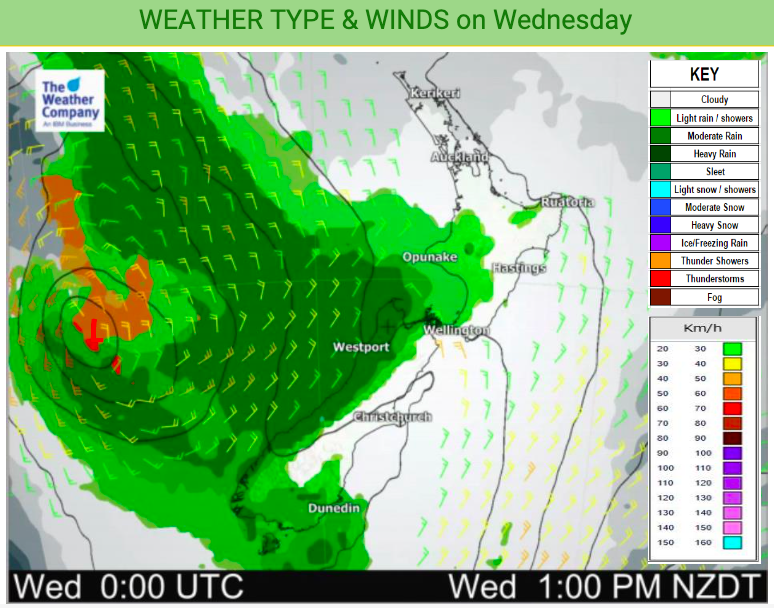 A large low is moving in from the Tasman Sea making for a mild day in most places, but cloudy too with rain forming in the south.

To drill down deeper, go to www.RuralWeather.co.nz or visit your hourly forecasts at WeatherWatch.

Northland, Auckland, Waikato & Bay Of Plenty
Mostly cloudy, some sun may break through at times for Northland and Auckland. Skies will be cloudier about Waikato and Bay Of Plenty with the risk of a shower later in the day. North to northeasterly winds.
Highs: 23-25

Marlborough & Nelson
Cloudy, rain develops about Nelson around midday then spreading into Marlborough during the afternoon. Rain may be heavy about Nelson and the Sounds in the evening. North to northwesterly winds picking up later in the day.
Highs: 19-21

Canterbury
Cloudy, some scattered rain or showers gradually moving into South Canterbury from afternoon. Further north conditions are drier but there may be a few spits from evening. Further inland about the high country rain pushes over from the west late afternoon or evening. East to northeasterly winds.
Highs: 21-22

West Coast
Cloudy with the odd shower developing in the morning, turning to rain during the afternoon and becoming heavy. Northeasterly winds.
Highs: 15-17