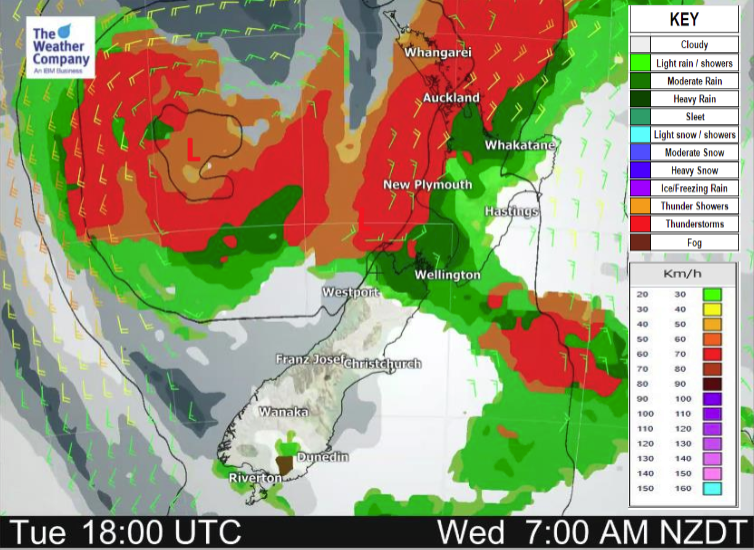 Expect unsettled weather for the top half of the country today thanks to a broad low pressure system with it’s centre to the west of the North Island in the Tasman Sea. A few showers about the far south spread into Canterbury this evening.

Temperatures in the late teens or early twenties for most. Southerly winds freshen about the eastern South Island during the course of this afternoon and evening, southerlies become strong through Cook Strait overnight.

Northland, Auckland, Waikato & Bay Of Plenty
Some showers with isolated possible heavy falls. Northeasterlies change to the westerly quarter. There may be some sun late in the day before dusk.
Highs: 22-24

Western North Island (including Central North Island)
Some rain or showers, especially afternoon / evening where there could be a few thunderstorms and heavy falls. Winds mostly from the north or northeast then changing southerly overnight.
Highs: 19-22

Wellington
Cloudy with patchy rain or drizzle, light winds then southerlies pick up from late afternoon becoming strong at night. Rain becoming heavy in the evening with a rumble of thunder possible.
Highs: 19-21

Canterbury
Cloudy areas although there may be some sun especially Banks Peninsula southwards. Cloud thickens in the afternoon then expect showers late afternoon or evening, developing inland first then spreading to the coast.
Highs: 18-20

West Coast
Mostly sunny however, Buller sees some rain mid afternoon then a little further south into North Westland evening spreading in from the north. South to southeasterly winds.
Highs: 19-21

Southland & Otago
Cloudy areas and a few showers although not about Otago till late afternoon. Light winds tend south to southwest in the afternoon.
Highs: 16-21