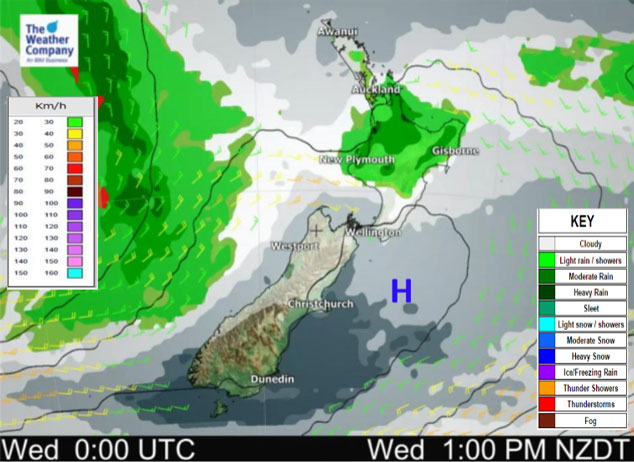 Mainly anticyclonic today with a weakening front stuck over the lower North Island, left overs from a cold front that is passing off out to the east.

Northland, Auckland, Waikato & Bay Of Plenty
Thickening cloud, a few showers develop about Waikato in the morning, perhaps the odd one for Auckland from afternoon. Bay Of Plenty has mostly cloudy skies, showers in the east with the odd one making it further east at times. Northland has a mix of sun and cloud, chance of an isolated shower late afternoon / evening otherwise mainly dry. Winds are mostly light.
Highs: 16-22

Western North Island (including Central North Island)
Morning rain eases to showers by midday, perhaps clearing about some southern parts of this group in the afternoon although remaining fairly cloudy. Southeasterly winds.
Highs: 12-18

Eastern North Island
Rain, possibly heavy in the morning (mainly inland about the ranges) then easing to showers by midday. Skies drying up in the afternoon for Wairarapa. Cool southeasterlies tend easterly in the afternoon.
Highs: 14-16