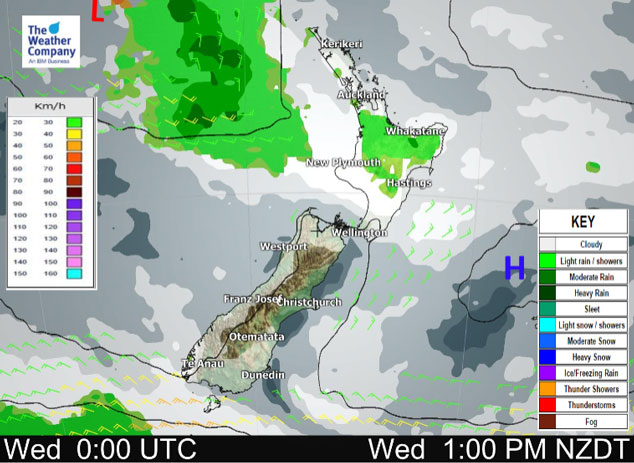 Mainly anticyclonic for most of New Zealand today, plenty of cloud cover also but a small clearance about the far south could deliver a light frost for some to start. A few convergence zones about the North Island bring isolated showers this afternoon.

Eastern North Island
Morning cloud breaks to some sun and high cloud, could be an early drizzle patch about the coast. Isolated showers develop in the afternoon for Hawkes Bay and Gisborne (mainly about the ranges), one or two may be heavy then clearing evening. East to northeasterly winds.
Highs: 18-21

Marlborough & Nelson
Morning cloud or fog breaks to a mostly sunny afternoon, could be an early drizzle patch about coastal Marlborough. Light winds tend onshore in the afternoon.
Highs: 18-21

Canterbury
Morning coastal cloud clears then mostly sunny, could be an early fog patch about some inland areas then clearing. Coldest temperatures to start will be about the Mackenzie Country. Light winds tend onshore in the afternoon, generally an easterly.
Highs: 16-18

Southland & Otago
Morning cloud breaks to sunny areas, risk of an early drizzle patch for coastal Otago. Could also be an early frost about inland western Southland and about the Southern Lakes area. Winds are light for most, tending westerly in the afternoon about coastal Southland, afternoon east to northeast breezes for coastal Otago.
Highs: 13-18