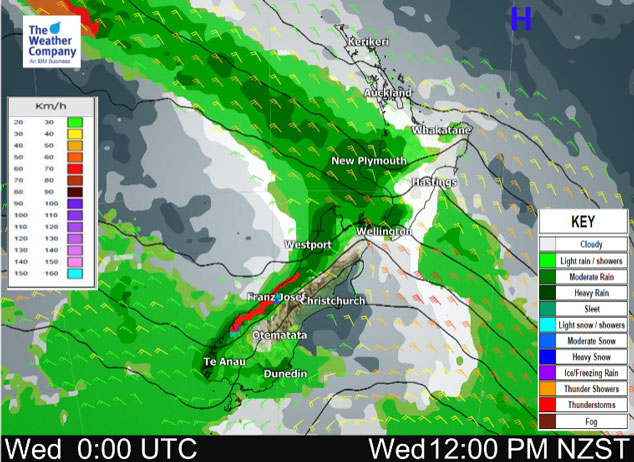 Northland, Auckland, Waikato & Bay Of Plenty
Sunny areas and increasing cloud, a few showers develop about Waikato by midday then elsewhere in the evening. Rain moves into the Waikato in the evening. Northwesterly winds.
Highs: 15-19

Western North Island (including Central North Island)
Showers for Taranaki and Kapiti, turning to widespread rain in the afternoon then easing later in the evening. Rain may be heavy about Taranaki for a time before easing. Breezy northwesterlies.
Highs: 12-16

Marlborough & Nelson
Rain for Nelson and about the Marlborough Sounds, clearing later in the afternoon with sun possibly breaking through before dusk. Spots of rain make it into coastal Marlborough at times also, clearing mid / late afternoon. Strong north to northwesterly winds.
Highs: 18-22

Southland & Otago
Any early spots of rain clear then expect some sun, showers develop in the afternoon possibly heavy before clearing later in the evening. Light winds.
Highs: 14-19