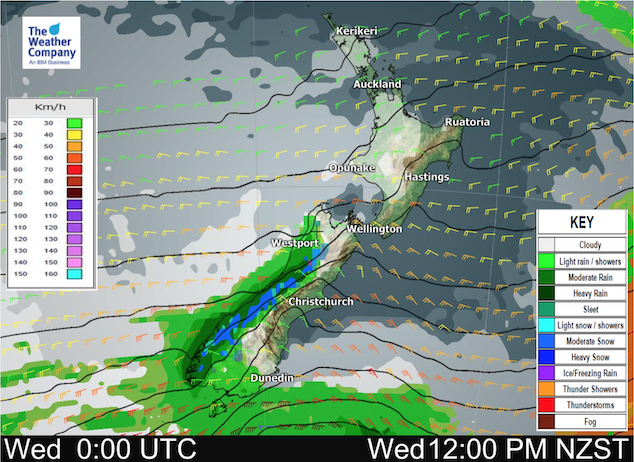 A westerly quarter airflow lies over New Zealand today, generally sunny in the east with some high cloud for the eastern South Island. Rain for the West Coast, morning showers for the western North Island clear.

Northland, Auckland, Waikato & Bay Of Plenty
A mix of sun and cloud, any morning showers about Auckland and Waikato (especially in the west) clear. The Bay Of Plenty has a mostly sunny day. Southwesterly winds.
Highs: 16-18

Marlborough & Nelson
Mostly sunny with some high cloud from afternoon, northwesterlies a bit breezy perhaps gusty after midday for Marlborough. Southwesterlies for Nelson tending west to northwest in the afternoon, chance of a shower later in the day for Nelson spreading from the west.
Highs: 15-17

West Coast
Showers, turning to rain in the morning about Fiordland then elsewhere during the afternoon. West to northwesterly winds.
Highs: 11-14

Southland & Otago
Rain at times for Southland. Otago has some sun, rain spreads into the lakes district from the west during the morning, the odd spit may spread into Central Otago during the afternoon. Northwesterlies build, strong about the coast with a risk of gales, tending a little more westerly around midday.
Highs: 13-16