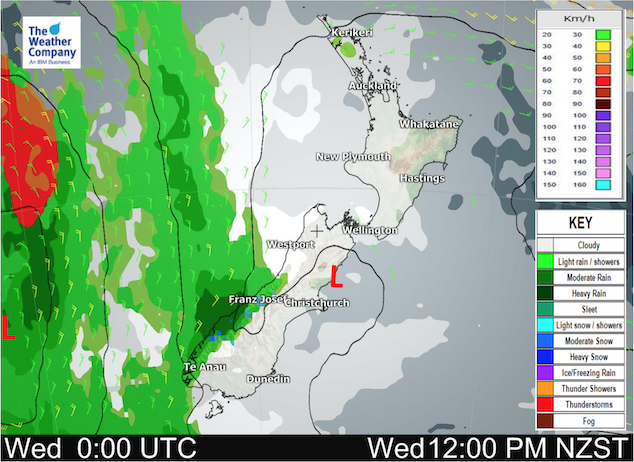 A broad ridge of high pressure lies over New Zealand today, gradually weakening over the South Island as a northerly airflow moves in.

Western North Island (including Central North Island)
Sunny areas and some high cloud, there could be a few patches of morning fog about some inland areas. Light winds tend northerly.
Highs: 14-16

Eastern North Island
Sunny areas and some high cloud, there could be a few patches of morning fog about some inland areas. Light winds tend east to northeast in the afternoon.
Highs: 15-18

Canterbury
A chance of morning fog then sunny areas and some high cloud, light winds.
Highs: 13-15

West Coast
There may be some morning sun otherwise mostly cloudy, perhaps some fog to start the day about some inland areas. Showers develop mid afternoon then turning to rain at night. Northeasterly winds.
Highs: 13-14

Southland & Otago
Any morning rain clears Southland then cloud breaks to some sun in the afternoon, elsewhere there may be some morning fog then afternoon sun. Light winds.
Highs: 12-14