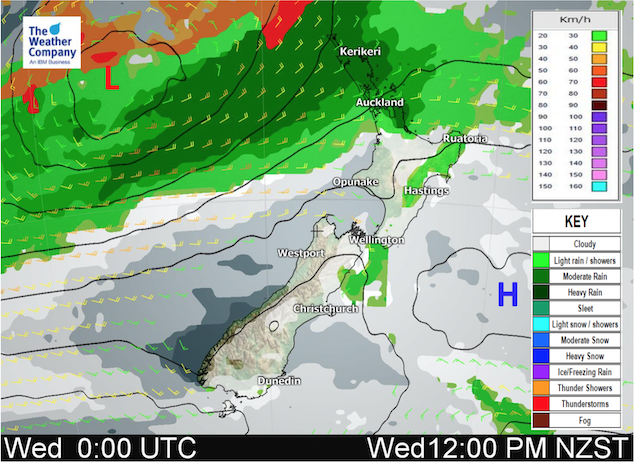 An easterly quarter airflow lies over New Zealand today feeding into a large low in the Tasman Sea. This low flings a front over the far north from afternoon.

Northland, Auckland, Waikato & Bay Of Plenty
Thickening cloud, the odd light shower or drizzle patch from Bay Of Plenty up through to Northland in the east. Rain becomes widespread for Northland in the afternoon with heavy falls developing, spreading into Auckland later in the evening. Easterly winds freshen.
Highs: 15-17

Eastern North Island
Cloudy areas, sun at times. There may be a drizzle patch or two. Cloud thickens in the evening with the risk of drizzle increasing. East to northeast winds.
Highs: 12-14

Canterbury
Mostly cloudy north of about the Rakaia River with southwesterly winds, some drizzle or a few showers later in the day. To the south expect a mix of sun and cloud, thickening in the evening.
Highs: 8-11

Southland & Otago
Cloudy areas about Southland with light winds tending southeast by midday. Central Otago has mostly sunny weather although there may be some morning fog, light winds. Coastal Otago has sunny areas and some high cloud, mid level cloud starts to increase from afternoon as light winds tend to the south.
Highs: 8-11