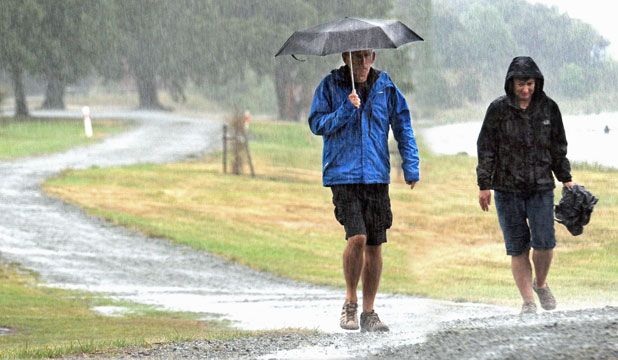 There was sunshine, rain, wind and cooler temperatures moving over the south today as the middle of the week went pretty much as predicted.

The odd shower did pop up over parts of Auckland which was a little earlier than expected.

Parts of the Waikato though are still wating for some decent rain.. “A little cloudy otherwise no different to the zillion other days we have had here in Rukuhia (South of Hamilton), not a drop of rain.. still we wait” said debbie on our Facebook page.

Zelda had her eyes peeled to the heavens earlier this afternoon – “Blue patches appearing on West Akld skies. Watched a good rain shower North of Rosebank 1/2 hr ago”.

Parts of the Manawatu saw a change overhead according to Lauren..”Rain clouds have started to come over Palmerston North and wind has picked up. Temp has dropped”.

Across Cook Strait and a southerly change was starting to kick in near Christchurch “Southerly change has come through here in Rolleston and temperature has dropped” posted Telly and Nicole commented..”Has been overcast and drizzling on and off in Chch, but still really warm. Southerly picked up now but still warm”.

Further inland across the plains and Helen added..”Just turned southerly here (inland mid-Canterbury near Sheffield), wind picking up, grey skies. Not cold tho… yet!”.

Nelson has also seen rain today which may have delivered a few smiles for local farmers but more is needed to ease the big dry in the area.

The heat was turned on for eastern areas of the North Island with summer-like temperatures appearing.
The 30 degree mark was touched in a couple of areas but officially Hastings scored 29, Napier 28 and with Gisborne managing 27 – however tomorrow the southerly will see that whittled away and some rain is expected to dampen down the dust.
Gore shivered today with a high of only 12 degrees while Invercargill and Dunedin were not a lot higher on a chilly 14 degrees.

Tonight the rainband is heading north over the upper South Island with the risk of localised heavy falls and heading across western and northern parts of the North Island tonight, overnight and tomorrow morning.

Temperatures are much colder across much of the South Island as this story goes live and the days of consistent heat appear to be numbered across these parts.