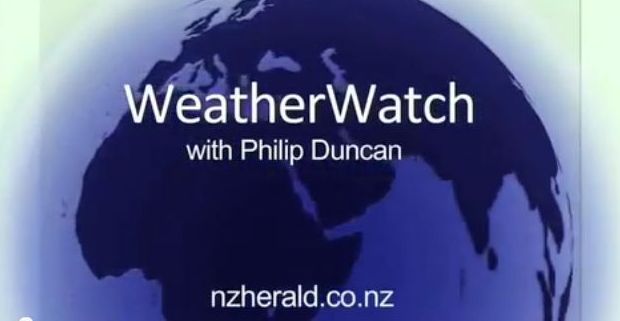 In today’s weather video with nzherald.co.nz – Philip Duncan discusses the latest on Tropical Storm Isaac which is now on track to hit New Orleans in less than 48 hours. potentially growing into a Cat2 Hurricane.   We have full details on our week ahead here in New Zealand too as a large high starts to move towards us – but first, a few showers to get through.

I have done some checking around on some US weather and news websites, and whilst there is some concern for New Orleans with the expected arrival of Isaac as a Cat 2 Hurricane on Wednesday NZ time, it is nothing like the concern that was being expressed about Katrina at the equivalent time.

What you have to remember is that whilst Katrina was a Cat 3 at landfall, a mere 18 hours earlier it had been a Cat 5, and a large one at that. The storm surge generated by Katrina topped out at 27.8 feet (over 9 metres) at one point, which is a record on the US coastline, beating the surge generated by Camille in 1969 when she was a Cat 5 storm at landfall with SUSTAINED winds of 190mph (260kph).

But also, whilst Isaac is also a large storm and may set a similar body of water in motion, the much weaker winds prior to landfall will mean that Isaac’s storm surge will be much smaller than Katrina’s was – unless the storm explodes to Cat 5 prior to landfall, which isn’t being predicted by anybody. In comparison, Katrina was forecast by just about everybody, to be a dangerous Cat 3/4 hurricane at landfall as environmental factors were much more conducive to rapid strengthening at the time, and it was noted that strengthening to Cat 5 was not out of the question.

I recall Hurricane Gustav hit New Orleans head on in 2008, and was billed as the first major test of the rebuilt levees since Katrina. Gustav was a Cat 2 storm at the time it hit New Orleans, and had been a Cat 2 since crossing Cuba. Whilst there was damage throughout Louisiana and other areas, and seven people were killed, it was nothing like the disaster of Katrina.

If Isaac behaves as predicted, and intensifies slowly to Cat 2 strength at landfall, I expect the damage done will be similar to Gustav. The media coverage I am seeing from US websites seems to be consistent with that analogy. Yes this is a dangerous storm and people do need to take heed of the advice the authorities are giving. But nobody is saying this is ‘the big one’ like they were 7 years ago.

Agree with you totally – this isn’t a Katrina but it could be a fairly similar strength hurricane as it makes landfall – and if not, even a Cat1 hurricane could cause significant rainfall and lead to more serious flooding.  But risks in New Orleans are really more about manmade problems such as levees breaking.

As with any hurricane it’s all about timing and strength at landfall.  If it hits between New Orleans and Mobile it may not make the big headlines – but a direct hit could.

Isaac also has the potential for rapid deepening over the next 24 to 36 hours…Cat2 is the current prediction – some say 3 is possible.

Quite a large storm but still not terribly organised with so many mountains and landmasses in the way of a perfect flow – that changes now that’s out in the gulf.

Weather.com and CNN are both running excellent forecast updates in addition to our updates here at WeatherWatch.co.nz