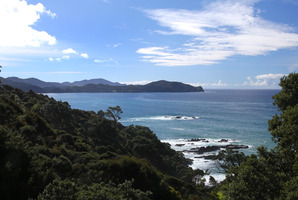 Up to $10,000 of taxpayers’ money was spent on a rescue in Northland over the weekend for a group of Aucklanders “who were not in real danger”, police say.

Police, Coastguard and a rescue helicopter were all involved in the search and rescue of two men, aged 25 and 33, who became stuck on a remote Bay of Islands walking track in poor weather on Saturday night after one of the men injured his knee.

A third man with the group had tramped to a Department of Conservation (DoC) hut for shelter, taking the group’s only torch with him, police said.

The trio set out to walk the Cape Brett track at Saturday lunchtime, thinking it would take just two hours, but by 9pm raised the alarm when one of them became injured and couldn’t continue.

They were able to give their approximate location to police, and the Northland Emergency Services Trust (NEST) rescue chopper was sent out to find them.

However, low cloud around the hills prevented the helicopter from getting close. Coastguard took a police search and rescue team to Cape Brett in “very difficult and trying conditions” in the dark.The injured man was found at 1.30am, huddled under a sleeping bag with his friend on an exposed ridge.

His injuries were deemed to be minor, officer in charge of SAR Senior Sergeant Cliff Metcalfe said, and he was walked to the DoC hut, arriving around 4am.

The group was picked up by Coastguard around 9am on Sunday and taken back to Waitangi.

Mr Metcalfe said the men should not have attempted the hike “given their poor preparation and personal fitness levels”.

“They were totally unprepared for what they attempted to do,” he said.

“They disregarded the weather reports of heavy rain and strong winds, were not fit enough to walk the track and succumbed to fatigue eight hours into the walk. The knee injury was minor and the person was able to walk out to the hut under his own steam in the end.”

The group’s lack of preparation could “easily have compounded the situation if SAR had not reached them in time”, Mr Metcalfe said.

“Their food consisted of 10 packets of two-minute noodles and they had less than two litres of water each. They were not carrying wet weather clothing despite the weather forecasts, had no shelter and had one sleeping bag between two people,” he said.

“They hadn’t enquired about the walk or the time it would take them to get to the hut, the terrain they may encounter, nor did they consult with DoC or pay attention to the track sign information at the start of the track.”

The rescue operation would have set taxpayers back by between $5000 and $10,000 for “two people who were not in real danger”, Mr Metcalfe said, as police have to foot the bill for calling the helicopter out on a rescue mission.