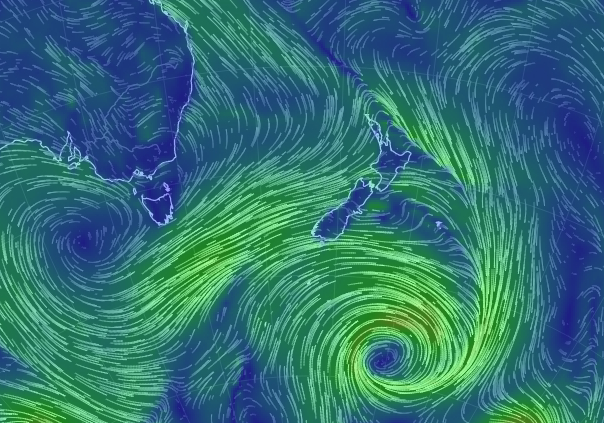 As we’ve been anticipating all week, the ex-tropical cyclone Ola will have its final say in our weather today – in the form of a rain-heavy front over the north of the North Island.
Wind and rain feature in other parts of the country today, too – before clearing up during the long weekend.

Gusty west to southwest winds pick up about western coastal Waikato and Auckland in the west in the evening, blowing strong at times.

Some goes for Napier and Gisborne in the evening except winds are more west to northwest.

Westerlies may gust to gale at times this evening in this area, particularly in places near the coast.

Other risk areas are Cook Strait, Wellington and Wairarapa in particular – where winds gusting to gale are likely at times.

The West Coast of the South Island can expect showers to pick up in intensity this afternoon and into the evening – with a few heavy falls possible, and the chance of some hail too – though conditions will ease overnight.
Winds will be fairly gusty right on coastal areas from the west or southwest, winds a little lighter just inland.

Southland will see showers falling heavy at times, and even some hail.
Strong westerlies will tend more southwest this afternoon.

Canterbury is fairly good during the day, itâ€™s not till later in the evening that a strong southwest change moves into South Canterbury then makes its way north overnight – bringing showers, possibly heavy with thunderstorms and the risk of hail here too.