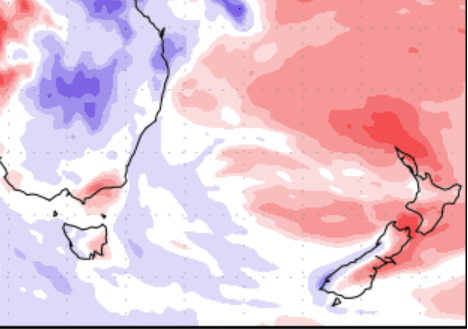 High pressure brings settled weather for most of New Zealand today, a frosty start this morning for some especially inland parts of the South Island. We still have cloud and showers for the eastern North Island but they will gradually clear from the south.

Some cloud and the risk of a shower about Buller thanks to a trough.

TEMPERATURES GRADUALLY PICK UP TOWARDS THE WEEKEND

Afternoon temperatures are mostly going to be in the mid teens around New Zealand today and tomorrow, perhaps only just getting into double figures for some inland spots. Thursday and Friday starts to see highs getting up to between 17 and 19 for the upper North Island (Waikato and Bay Of Plenty through to Northland).

This weekend high’s become a little warmer yet again especially for the upper North Island and eastern regions of both Islands, temperatures in the late teens or early twenties. Some western spots and the far south of the South Island are a little cooler due to prevailing westerly winds and cloud with precipitation.

Through to the 18th May conditions are still looking mainly dry for most of New Zealand, especially eastern regions and the far north. The West Coast sees slightly wetter than normal weather and the far south can expect average rainfall for the time of year.

The bulk of the rain for the West Coast is thanks to a front moving through this weekend, quite possibly Sunday. We get some rain or showers about the far south this weekend also. The western North Island sees some rain early next week as the aforementioned front moves through then.