Weather headlines (x3) for Wednesday: Rain eases in the east, T/Storms North Island on Thursday, Sunny in the east on Friday 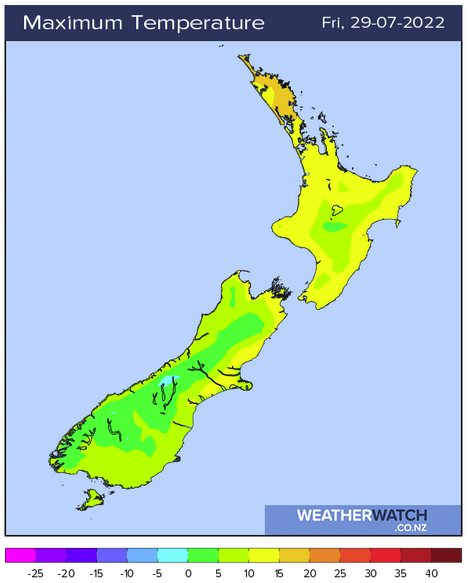 Rain for eastern Otago will ease this afternoon bringing and end to what has been a very wet eastern South Island over the last day or two. The rain in and of itself wasn’t particularly heavy but the already water logged ground combined with the persistence and length the rain fell for definitely led to more flooding issues.

Western parts of the North Island experience some heavy rain this morning also but this eases this afternoon too.

CHANCE OF THUNDERSTORMS FOR THE NORTH ISLAND ON THURSDAY

A series of features pushes over the North Island on Thursday bringing a chance of heavy falls and thunderstorms.

Expect a chance in the morning in the southwest (Taranaki through to Manawatu, especially Taranaki), another chance exists here in the evening.

Also in the morning a chance exists for Northland, Auckland, Bay Of Plenty and perhaps Waikato, the highest risk here being Northland and eastern Bay Of Plenty then easing from afternoon as a front pushes offshore.

DRY WITH SOME SUN IN THE EAST ON FRIDAY

While there is a possibility of sun for eastern regions on Wednesday and Thursday (more so the eastern North Island), Friday presents the first chance when sunny weather looks likely right along both coast lines after some morning cloud breaks away.

Temperatures should lift into or at least get close to the mid teens about the eastern South Island, the eastern North Island has highs reaching 18 to 19 degrees.