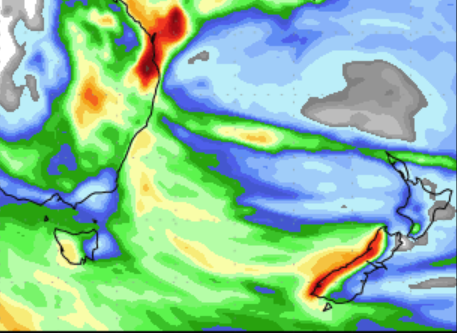 It would have been a cold night with frosts this morning in some places south of about the Waikato. The coldest temperatures have occurred about inland South Canterbury in Omarama getting down to -3.

SETTLED FRIDAY, FRONT FOR THE SOUTH ISLAND ON SATURDAY?

The weather is looking settled again tomorrow with high pressure covering New Zealand, Saturday is a little up in the air, at least for half of the Country. The North Island will be settled we know that much, but the South Island is oscillating in weather models between having a front move in with rain in the west and the other option has a front staying away to the southwest with only Fiordland seeing some rain.

So lets say at this stage the West Coast has a 50 / 50 chance of rain on Saturday, either way it will be dry in the east.

WESTERLY QUARTER AIRFLOW FOR THE NEXT WEEK OR TWO

The West Coast picks up the bulk of the rain moving forward but rain moves through at times for the western North Island too.

These images below are the precipitation forecasts for the 11th – 19th May and 19th – 27th May. The very darkest red colour shows up to 250mm of precipitation or greater, the lightest colour (white) is 0.5mm or less. The scale is just below these images.