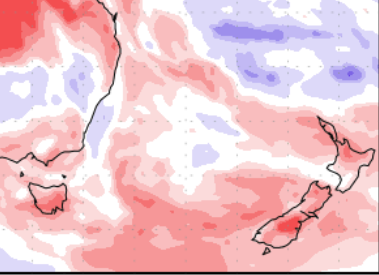 FRONT MOVES ONTO THE FAR SOUTH

The weather today is basically a tale of two halves as is often the case with New Zealand, we have showers in the west and drier, sunnier weather in the east. Temperatures this afternoon for eastern regions should get into the mid to late teens.

Meanwhile a front is pushing into the far south this afternoon bringing some rain, it pushes northwards this evening and overnight with showers eventually moving into Canterbury. Tomorrow the front moves onto the North Island.

RAIN MAY BE HEAVY FOR THE LOWER NORTH ISLAND ON SATURDAY

A shallow area of low pressure moves into central New Zealand on Saturday, with it comes some rain which may be heavy into the second half of the day about the lower North Island. Taranaki down through to Wellington and perhaps across to Wairarapa.

The rain outlook for New Zealand over the next 7 days is looking mainly dry but in the map below we can see the white area for the lower North Island which represents the rain for Saturday in the map above.

AFTER SOUTHERLIES HIGH PRESSURE MOVES IN NEXT WEEK FROM TUESDAY

A period of southerly quarter winds spread over New Zealand on Sunday and Monday bringing showers in the east, drier weather out west. Apart from the far north which sees showers in a southeasterly airflow.

Moving forward to Tuesday high pressure starts to move in over the South Island bringing settled frosty weather, this spreads out more towards the the North Island on Wednesday.