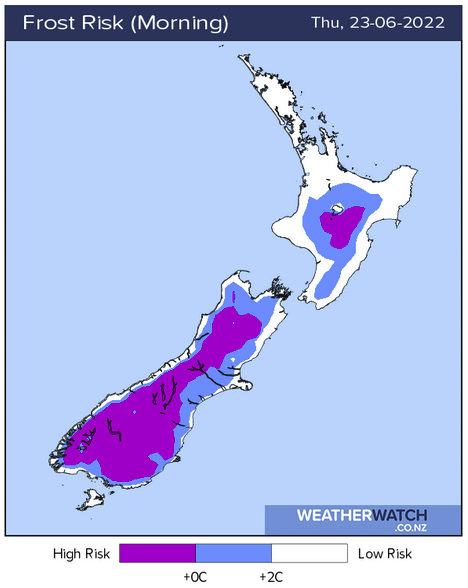 Very cold temperatures again last night with many South Island regions and inner North Island areas experiencing frosts. The coldest temperatures were about inland South Canterbury, Omarama getting down to -10 while Twizel has seen -7.

TEMPERATURES IN THE EAST WARM ON SATURDAY

Eastern regions will see temperatures in the early to mid teens on Friday, Saturday gets even warmer still with highs up around 16 to 17 degrees. The frost risk alleviates on Saturday morning also.

NO STRONG WINDS TILL LATE JUNE?

Winds are looking light to moderate for the week ahead, when a front moves through late Friday / Saturday northerlies ahead of it may be a bit breezy though. On Monday and Tuesday we get freshening northerlies for a time ahead of a front too but then winds change fresh southwest also.

Looking further afield to Thursday 30th June, a low passes by the North Island just to the northeast moving in a southeasterly direction. This may drag in a strong southerly airflow over the North Island during this time then easing 1st July.