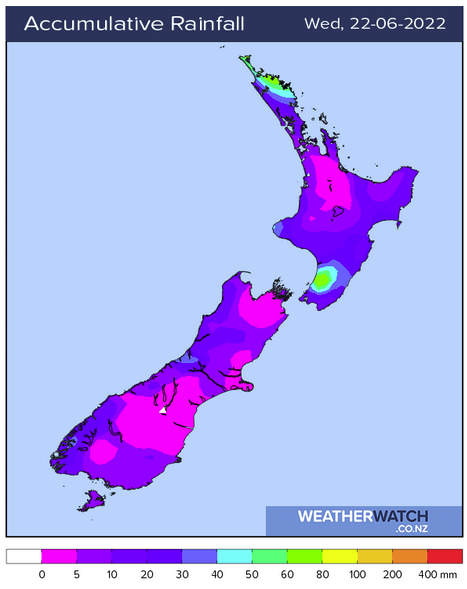 NICE DAY IN THE SOUTH, FRONT LIES OVER THE NORTH ISLAND

After any early cloud clears this morning, Southland has a nice sunny day, cloud takes a little longer to clear for Otago but sun should still break through this morning. Winds are light. Temperatures are not all that warm though staying between 7 to 10 degrees this afternoon.

A weak cold front moves over the North Island bringing a few showers in the east, this links into a warm front to the west in the Tasman Sea. So western parts of the North Island are a bit cloudy today also with patchy light rain.

A front moves through central New Zealand on Saturday and is still due to deliver some rain to the lower North Island, heavy falls may not occur anymore though.

The below map shows the accumulative rainfall through to Wednesday next week, as we can see the tip of Taranaki and southern Manwatau show a few areas of rain which moves through on Saturday. Any rain in the far north will occur around Monday and Tuesday next week in a southeasterly airflow.

STILL FROSTY AND SETTLED FROM ABOUT TUESDAY / WEDNESDAY

A high pressure system is still due to move in about Tuesday next week for the South Island then make some inroads for the North Island on Wednesday, this should bring in some settled weather, some sun and frosts.