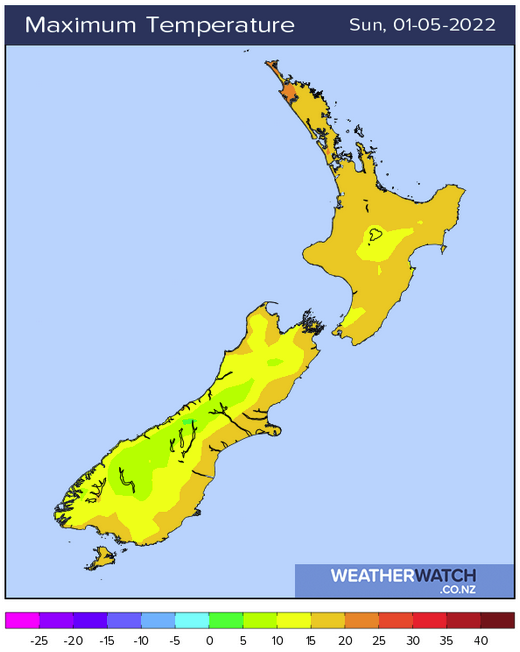 SETTLED TODAY AND THIS WEEKEND FOR MOST

A high pressure system brings mainly settled weather to most of New Zealand today and this weekend. We do have a few showers pushing in about East Cape through to Northland in the east in an easterly airflow and for the South Island a few showers may affect the West Coast at times.

Sunday is where things change a little, rain starts to move into South Westland with heavy falls for Fiordland as a front pushes in, rain gets into Southland also. Showers pick up a little further north along the West Coast too. Elsewhere stays roughly the same weather wise.

DOES THE SETTLED SPELL BREAK LATER NEXT WEEK?

Long range modeling indicates the settled spell may end around Thursday or Friday next week as a few fronts head in. While a front does lie over the South Island this coming Monday and Tuesday it mainly delivers rain or showers to just the West Coast and isn’t really a country wide phenomenon.

A few maps below showing Thursday and Friday next week where the high out to the east finally gets a move on and some wet weather moves in.

TEMPERATURES WARM IN THE EAST AND NORTH THIS WEEKEND

Eastern regions and the most of the North Island see temperatures in the late teens or early twenties this weekend and through to Wednesday next week, this is due to a northerly quarter airflow moving around a large high out to our east.

About the higher inland country of the North Island like the Central Plateau highs will be a little bit cooler.

Southland looks to have some warm weather too but may stay in the mid teens on Sunday as some rain moves in. The West Coast during this period stays in the mid to late teens with highs trending warmer the further north one goes into the likes of Buller and cooler as one heads down into South Westland more.

Temperature map below for this coming Sunday, for more on temperatures please visit this page here.