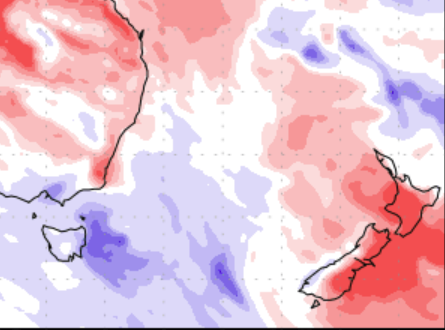 TEMPERATURES START TO PICK UP IN THE EAST

Thanks to a northerly quarter airflow temperatures for eastern regions (especially the eastern South Island) become a bit warmer this weekend, high’s getting into the late teens or early twenties. Sunday pips Saturday for the warmest highs, Saturday may even be a touch cool right along the coastal fringe still due to northeasterly winds then when going inland conditions warm up more.

Note the temperatures below for Christchurch and Ashburton. Christchurch being nearer the coast on Saturday has a high of 16 however Ashburton being a bit further inland gets to 19. Then Sunday both centres are warm getting up to 21.

HEAVY RAIN FOR FIORDLAND ON SUNDAY

A front moves onto the lower South Island on Sunday bringing rain and this becomes heavy for Fiordland, rain moves into Southland also then this clears away overnight.

Conditions are still looking mainly dry for the next 7 days ahead as can be seen in the “Precipitation percentage of normal” map below. This basically shows where rainfall is looking drier than normal versus wetter than normal, red is dry, blue is wet. The drier weather is thanks to plenty of high pressure and northerly airflow’s blocking anything coming eastwards, especially as far as the eastern South Island is concerned.

We appear to have average rainfall for East Cape and Coromandel up through to eastern Northland, this is thanks mainly to easterlies riding around high pressure, directing in a few showers now and then. The West Coast of the South Island appears to have average rainfall thanks to northerlies and Fiordland gets some wetter than normal weather, this mainly due to the front mentioned above bringing heavy rain there this coming Sunday and another front on Friday next week.