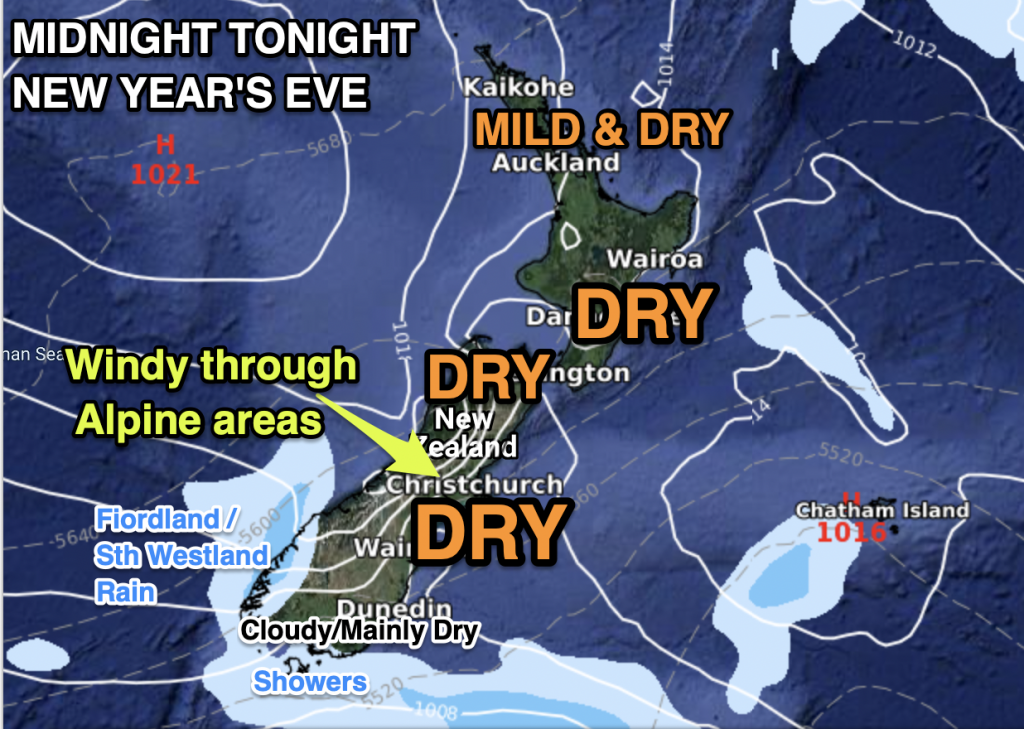 Dec 31 2021 — The forecast for today, tonight and tomorrow will be considered good by most New Zealanders, but it’s not perfect for all.

A couple of isolated afternoon showers/downpours are possible in the ranges of the upper South Island (Marlborough) and the eastern ranges of the North Island. Elsewhere is completely dry or mainly dry.

WIND
Sou’westers will still blow through Auckland (a bit annoying for some in tents) and that may also impact a few Coromandel Peninsula coastal areas. Nothing at all serious, more annoying factor for some campers.

Worst winds will be through the Southern Alps where some areas may be gusty from the westerly quarter – and that may increase as the day and night wears on.

TEMPERATURES:
Mild nationwide but the upper North Island may feel more like the 20 degree mark at midnight. Coolest areas will be at higher elevations, like Queenstown and Taupo. Check your local RuralWeather.co.nz or WeatherWatch.co.nz to drill down more (Handy Hint: RuralWeather.co.nz has a ‘humidex’ forecast which is helpful at working out how the temperature will ‘feel’ each hour across Friday (and for 10 days out).

ClimateWatch – FIRST WEEK OF JANUARY 2022:
Is looking drier than average for most of NZ – but the tropics are very energetic and we’re monitoring a low pressure zone in the Coral Sea which may become a tropical storm. It’s not likely to directly impact NZ as a storm based on latest modelling – but it has a complicated journey to NZ due to the large high pressure zone over us now (moving in today and this weekend). Either way, it’s an area to monitor but much of Week 1 in January looks dry.

From all of us at WeatherWatch.co.nz (and RuralWeather.co.nz) have a great night and HAPPY NEW YEAR!