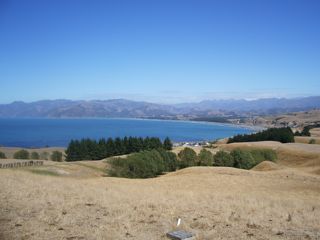 Have you ever sat at home waiting for a huge weather event that’s been predicted to happen?

One that’s got you all excited, whether it’s a thunderstorm?  Or high winds?  Or rain that’ll threaten our very existence?  Only for it to not happen?

I recall one such event.  It was when I was a little girl living in Kaikoura during the 80’s.

I remember that it happened on a school day.  A day where the sky was blue, the sun was warm and the sea was sparkling.  The kind of day you’d rather be out playing french cricket with your friends than learning about maths.

On this beautiful day I remember being told that school would finish early because Kaikoura was about to be hit by huge winds.  Winds of a billion kilometres an hour, well more like 120 kilometres an hour or more.

We were told our parents were going to pick us up at 2pm, which was very exciting as it meant we could watch tv at home while drinking full sugar coke and eating white bread sandwiches instead of learning that 7 x 6 is 42 and that i goes before e except after c (explain the word neighbours to me!).

So at 2pm my mother picked up me and my sisters and when we got home we had to go round the house making sure the windows were securely fastened and that there was nothing outside that could blow away.

Nothing happened AT ALL.  There was not even a breath of wind, let alone a gust.

My disappointment was huge.  It was a let down of magnificent proportions.  Not getting a Barbie for Christmas or a GI Joe for my birthday paled in comparison.

No predicted winds of 120k’s an hour turned up.

No outdoor tables were uplifted

No windows were ripped of their hinges.

And that is what I call a Weather Fail.

These days weather predictions are much more accurate, however weather has a mind of its own and can still sometimes completely fail to show up!

So what Weather Fails have you experienced?  Have you ever been camping only to have a gust of wind come out of nowhere and blow away your tent?  Perhaps you’ve enjoyed a picnic on a sunny day only for a rain cloud to come along and leave you drenched?