WATCH: Half a metre of snow fall in Pennsylvania in 24 hours 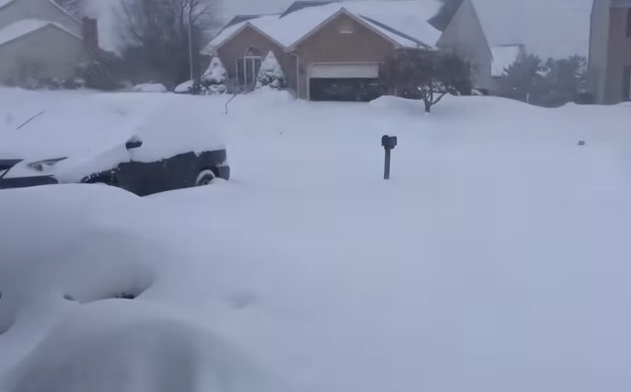 A Pennsylvania city is still clearing snow left from a record-breaking blizzard that occurred two months ago despite it being 70 degrees (21C).

An estimated 15,000 tons of snow from the city of Harrisburg and surrounding municipalities was piled high on City Island following a 30-inch snowfall in January.
And for the last three weeks, city employees have been using gas-powered burners to help melt the remaining piles of snow before its baseball team’s opening day in April, according to Pennlive.

Snow had been piled on the City Island parking lot following January’s blizzard because there was no where else to put it as crews tried to clear the streets.

Now the snow has to be melted or moved by April 14, the opening day for the Harrisburg Senators baseball team, according to Pennlive.

After giant piles of snow dumped on City Island had hardened in the weeks following the snowstorm, Johnson was concerned it would not be cleared in time for the baseball team’s opening day.

In an attempt to help speed the melting process, in late February he borrowed some gas-powered burners to blow heat on the snow.

His crews also broke the snow into smaller piles using two loaders, one of which was borrowed.

‘We couldn’t just sit back and wait for something to happen,’ he told Pennlive.

He said crews since have been working seven days a week in the parking lot, and on Tuesday night, he estimated three-quarters of the snow that had been dumped on the Island had melted.

Johnson added that in regards to clearing all the snow, ‘we’ll be there by the end of the month,’ according to Pennlive.

Not like you to show a January Video with a current March story.