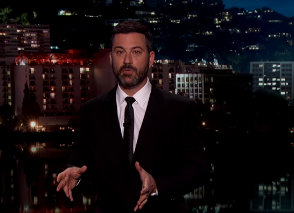 Kimmel was moved to contact these scientists (and the small child) by Sarah Palin.

The former Governor of Alaska does create movement in people. In this case, Palin had shown her support for a documentary about climate change denial.

Kimmel tried to explain that when 97 percent of scientists agree that climate change is caused by the behavior of real human beings, it’s likely to be true.

He wondered who Palin was to question these scientists.

“I have a feeling maybe Sarah Palin wants global warming,” he said. “It’s cold in Alaska.”

He added: “The idea that she knows more than 97 percent of scientists is offensive.”

Kimmel insists that this isn’t a political issue. It’s not about left or right. It’s about scientists being right.

So, perhaps knowing that his own authority is fairly minimal on this subject, he produced several climate scientists to express their views.

“I’d probably tell you that a meteor was coming and try to sell you a helmet,” says paleontologist and isotope geochemist Aradhna Tripati.

A small child added his feelings: “You motherf***ers better not f*** this up.”

Kimmel isn’t the only comedian who’s tried to explain that climate change is real. John Oliver spent a few minutes on the subject too.

But some people will believe what they choose to believe.

For them, Kimmel has only good wishes: “If at the end you disagree [with the scientists], while we’re all under water I hope you’ll be the last one who gets a snorkel.”

Last night Kimmel read out aggressive and poorly worded Facebook updates from his viewers who felt he wasn’t qualified to tell them Climate Change is happening. Some of them were harsh, but he turned it around saying if these social media updates reflect humans then maybe climate change wiping us all out is actually worth it.

It is well worth reading.

“It is obvious Mr. Kimmel has not seen ‘Climate Hustle’ or he would have known better than to recite the same propaganda litany of climate ‘facts’ which the movie deals with head-on. Using a video of cursing scientists warning of a tired litany of doom, using terms like ‘apocalyptic’; ‘catastrophic’; and ‘extremely dire’ was bland and predictable and the very reason that ‘Climate Hustle’ was made. Apparently, Kimmel thinks failure to believe in man-made global warming fears is akin to not believing in gravity or yogurt. Odd.”

“Mr. Kimmel, I challenge you to watch ‘Climate Hustle’ and issue an apology for your climate pablum that you spewed to viewers. ‘Climate Hustle’ was made to counter the very boilerplate rants that you, Mr. Kimmel, engaged in. The public needs to view ‘Climate Hustle’ if, for no other reason, than to hear Mr. Kimmel’s climate talking points dismantled. Now back to your regularly scheduled programming.”

“Mr. Kimmel, I challenge you to watch ‘Climate Hustle’ –

Average four out of five stars for Climate Hustle at the movie review site Fandango.

Thanks for the LOLz and giggles. This little satire from America really made me laugh. We all know there’s really annual climate change. It’s called Spring, Summer, Autumn, Winter. Thses “climate changes” happen to vary from year to year, and thus, it keeps you guys in work and gives us lay-people a place to post questions to you like, Why was it warmer in Medieval times than now?

Just something to ponder.