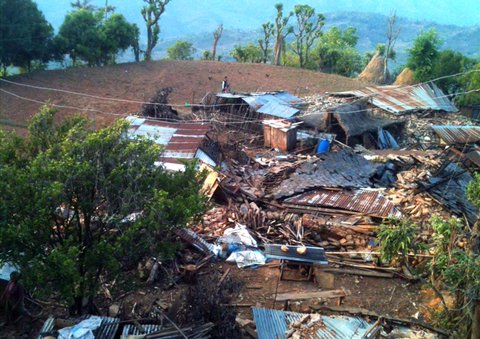 But power blackouts in the capital city of Kathmandu, supply shortages and difficulties getting around complicated the efforts.

By nightfall, at least 3,954 people were known dead in Nepal, India and China as a result of the earthquake. Nepalese officials say more than 7,000 were injured.

Nearby Army Pavilion has become a tent city. 1000s made homeless or too scared to be under a roof are squatting here. pic.twitter.com/eBd9xYjIr9

CNN’s Dr. Sanjay Gupta said doctors at one Kathmandu hospital had moved patients from the 120-year-old building and into another structure, where they were operating on patients in rooms normally not used as operating theaters.

Hospitals were running short on supplies despite international efforts to rush in aid. Numerous aid groups and at least 16 nations rushed aid and workers to Nepal, with more on the way.

And across the region, thousands prepared to spend another night outdoors, fearing that damaged buildings could collapse if there are more aftershocks.

The destruction in Kathmandu, the capital, is stark: revered temples reduced to rubble, people buried in the wreckage of their homes, hospitals short on medical supplies and overflowing with patients. Serious damage is also reported in villages in the surrounding valley.

But farther out across Nepal’s rugged landscape — closer to the epicenter of Saturday’s magnitude-7.8 quake — the situation is disturbingly murky.

Big Aftershocks In Nepal Could Persist For Years http://t.co/93Ih2gcNFa

“Information about remote areas is severely lacking at this time,” said Devendra Singh Tak, an official with Save the Children, noting that roads were blocked and communications unreliable.

Reports of ‘total or near total destruction’

Patchy reports have filtered through of entire villages leveled by the quake or engulfed by landslides.

“Some of the initial surveys that we’re hearing of from the zones closer to the epicenter talk about total or near total destruction,” said Jeremy Konyndyk, director of the Office of Foreign Disaster Assistance for the U.S. Agency for International Development.

Tak, who is in Kathmandu, told CNN that Save the Children and other aid groups were sending out teams Monday to more remote areas. The Nepalese government said it was flying helicopters to places it couldn’t reach by road.

“That’s where one needs to get out and conduct rescue and relief,” Tak said.

A NZ search and rescue team due to leave for Nepal last night has been stalled: http://t.co/2OEoGRHuNC pic.twitter.com/aKt66jJIWc

The United States announced Monday it would send $9 million, on top of the $1 million it had previously announced. That’s in addition to 45 tons of aid, a USAID disaster team and a search and rescue team already dispatched to Nepal. A U.S. Special Forces team in Nepal for high-altitude training was also helping out, according to the Pentagon.

Despite lengthening odds, rescuers continued to look for survivors.

On Monday, video posted to Facebook showed rescuers pulling a young boy out of debris after three hours of continuous digging.

“Look up, look up, open your eyes,” a rescuer says to the boy.

Hopes of finding many more people alive appeared to be fading as vital hours ticked by.

The death toll in Nepal stood at 3,862 Monday evening. Another 72 people died in India, while China reported 20 deaths. More than 7,000 others were injured in Nepal, officials said.

Most of those numbers are believed to have come mainly from Kathmandu and the surrounding area. They are expected to rise further as information emerges from more remote areas.