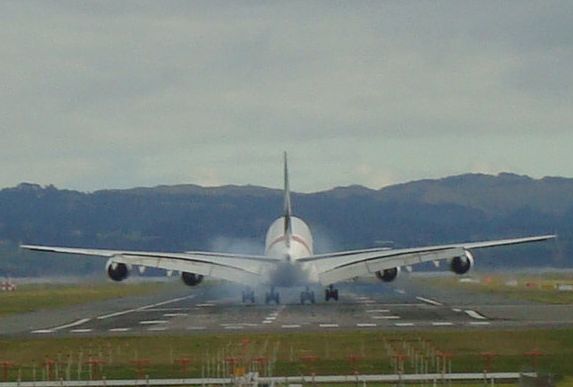 The ash cloud from Chile’s Puyehue-Cordon Caulle volcano is set to return to New Zealand tomorrow as flights in Australia have again been affected.

Thousands of travellers in Australia will have their plans disrupted today with airlines cancelling flights to and from Adelaide because of the return of the volcanic ash cloud which is now making its second lap around the globe.

There is also a possibility Melbourne flights will also be affected later today.

Qantas’s discount airline Jetstar has taken the same approach, cancelling eight flights up to 6.30pm NZT before reviewing the situation.

Virgin has suspended all flights to Adelaide and Mildura, while Tiger has cancelled eight flights into and out of the South Australian capital.

New Zealand Civil Aviation’s manager of meteorology Peter Lechner said the ash cloud is south of Adelaide at the moment and is expected to move over Sydney by midnight.

He said it is expected to move over New Zealand sometime tomorrow.

“The ash cloud’s base is 20,000 feet so fortunately that still allows considerable scope for aircraft operation,” he said.

Mr Lechner said it is up to airlines though to decide for themselves whether they want to fly under the ash cloud.

But it is heading for southeastern Australia and the southern NSW coast today at cruising altitudes between 8km and 13km.

“It’s not like we have got masses of ash coming over to blanket the continent at lower levels. It is just a high level cloud that happens to be at an inconvenient level for flying,” Dr Tupper told reporters yesterday.

Virgin Australia group executive of operations Sean Donohue said the latest weather advice necessitates the suspension of flights to Adelaide and Mildura until further notice because the ash plume would be below 20,000 feet.

“The forecast suggests the ash plume will be below 20,000 feet over Adelaide and Mildura tomorrow. With this in mind we are suspending these services tomorrow,” Mr Donohue said.

Airservices Australia said flights in and out of Melbourne may be affected from tomorrow as the cloud moved eastwards.

“There is a possibility that the ash plume could affect other parts of Australia, including Sydney and Canberra, from mid to late this week,” Airservices said in a statement.

Flights in Australia and New Zealand returned to normal on Friday after six days of havoc caused by the ash cloud.

Chile’s Puyehue-Cordon Caulle volcano began erupting on June 4, shooting a plume of ash into the air which made its way across the Atlantic and Indian oceans before reaching Australian and New Zealand airspace.