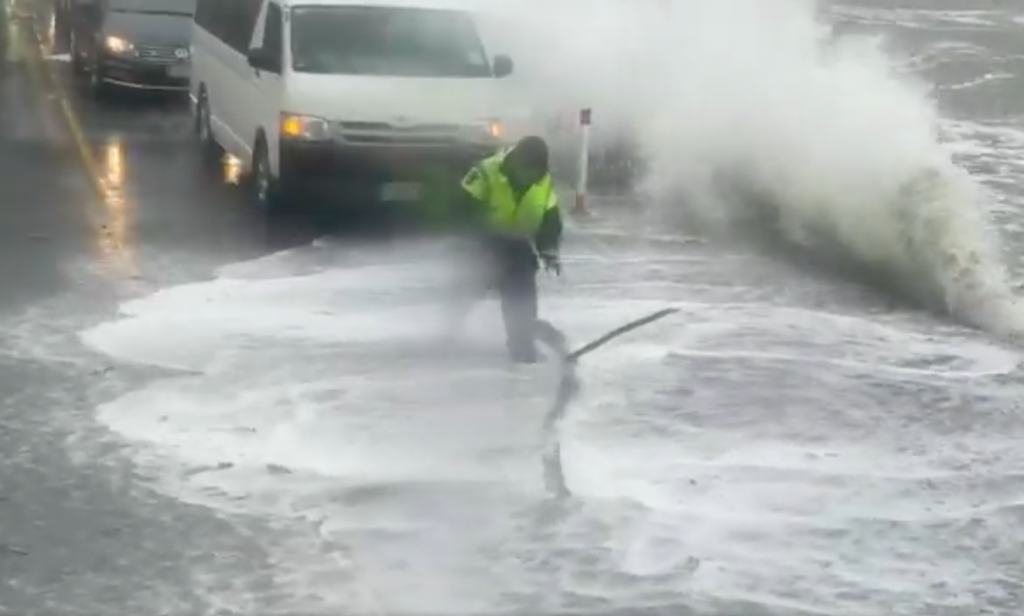 Forecast southerly gales have arrived and with big seas whipped up from an offshore storm it’s causing some driving chaos around some of Wellington’s waterfront roads.

This alarming video from Troy Baisden shows cars stuck in awful conditions in East Harbour as sea waves spray over their cars with traffic in both directions having to stop for debris. A driver stops at the front in terrible conditions to remove a tree branch lying across the highway, to allow traffic both ways to move again.

A hero move even if a little risky – but he did the right thing by pausing as a wave hit the wall and he braced as it sprayed over the road. He was wearing the right jacket for the job too! Perhaps more alarming is the fact the road was even open during this moment…the weather was well forecast in advance.

Also – we hope those cars get a nice shower of fresh water afterwards, to wash away the corrosive salt water!

A big thank you to Troy for allowing us to share here at WeatherWatch.co.nz – and as Troy says “Consider giving credit to Metlink for the seat at the front of a double decker bus”. Good point – we thought you had used a drone at first!

Is the squash zone wind in the Mediterranean called a ‘Mistral Wind’?

Oh so it is! I didn’t know it had a specific name, it was just a feature I kept noticing. That makes it even clearer – will have to mention that in more detail in a future video. Thanks for pointing out Graeme 🙂
Cheers
Phil D