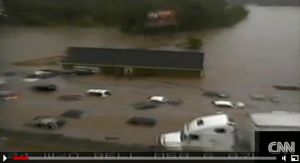 Severe flooding killed at least five people in central Tennessee on Saturday, officials said, as floodwaters inundated roads, highways and homes in and around the Nashville area.

Two people were killed Saturday when floodwaters swept them away as they tried to seek safety on the roof of their SUV about 80 miles northwest of Nashville, Stewart County emergency management spokesman Clint Mathis said.