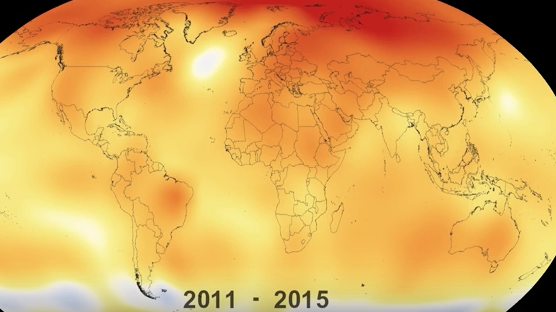 Data from US space agency NASA and the National Oceanic and Atmospheric Administration showed that in 2015, the average temperature across global land and ocean surfaces was 0.90 degrees Celsius above the 20th century average, surpassing 2014’s previous record by 0.16 C.

This was the fourth time a global temperature record has been set this century, the agencies said in a summary of their annual report on Wednesday.

“2015 was remarkable even in the context of the larger, long-term warming trend,” said Gavin Schmidt, director of NASA’s Goddard Institute for Space Studies.

The sharp increase in 2015 was driven in part by El Nino, a natural weather cycle in the Pacific that warms the ocean surface every two to seven years. But scientists say human activities – notably burning fossil fuels – were the main driver behind the rise.

“We would not have seen the record warming without the long-term trend,” Schmidt said.

The latest El Nino started in late 2015 and will last until spring 2016. It is among the strongest ever recorded but Schmidt and others say the weather phenomenon played just a supporting role in the earth’s temperature rise.

The 2015 data underscores the urgency of cutting greenhouse gas emissions if the world is to hold temperature increases to well below 2 degrees C, the target agreed to by more than 190 countries at climate talks in Paris last December.

Schmidt said the fact that the world is now halfway to the UN goal has led many scientists to argue that even that target is too high and more stringent goals are needed.

Absolute garbage again and just the usual fearmongering for those who don’t pay attention brigade unfortunately.

The political agenda (Climate Change/Global Warming) continues as per usual.

I’m still waiting for the sea level rises and the world ending warming of the planet. My vege garden is doind so well in these warm muggy summer weeks just as Mummy nature designed.

The agenda is nothing to do with climate but is a well thought out political tool to stuff the middle class.

By the time many of the Crayfish (people) have woken up to that fact it will be too late as the water will have boiled by then.

From Dr. Judith Curry on the paper behind the adjustments – “My bottom line assessment is this.  I think that uncertainties in global surface temperature anomalies is substantially understated.  This short paper in Science is not adequate to explain and explore the very large changes that have been made to the NOAA data set.   The global surface temperature datasets are clearly a moving target.  So while I’m sure this latest analysis from NOAA will be regarded as politically useful for the Obama administration, I don’t regard it as a particularly useful contribution to our scientific understanding of what is going on”.

RSS and UAH satellites (calibrated with real data from thousands of radiosondes) show 2015 comes in a distance third. In 1990 NASA stated satellites should be adopted as the standard way to monitor temperature change because they were more accurate. And USCRN data (which was set up to be the gold standard in surface temperature data) basically shows the same as the satellites.

but New Zealand is not getting any warmer ….most people over 40 would agree with me