Very Spring-like week on the way 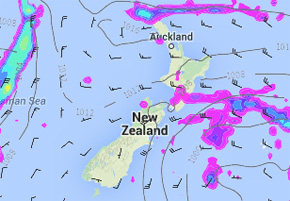 It is shaping up to be a very â€œSpring likeâ€ week ahead, northwesterly wind flows precede fronts that move over the country at various times. Out west will see the wettest conditions while eastern regions see warm temperatures.

On Tuesday a front clears the North Island in the morning bringing rain then showers to western regions, mainly dry out east with only the chance of an early shower then sunny periods increase. The South Island sees rain in the west, chance of a thunderstorm about too. Eastern regions are mostly sunny with
northwesterly winds, about Otago a few showers move through in the afternoon then into Canterbury around midnight.

On Wednesday a westerly airflow eases over the country, the North Island has periods of cloud and the
odd shower about. The odd light shower clears in the morning for the upper South Island then sunny periods increase, mostly sunny about the lower South Island with light winds.

Gusty northwesterlies spread over the whole country on Thursday, rain or showers for western regions and mainly dry and sunny out east with warm temperatures. Overnight heavy rain may spread into the Waikato / Central North Island.

Apart from temperatures slowly rising,still much winter in Auckland.