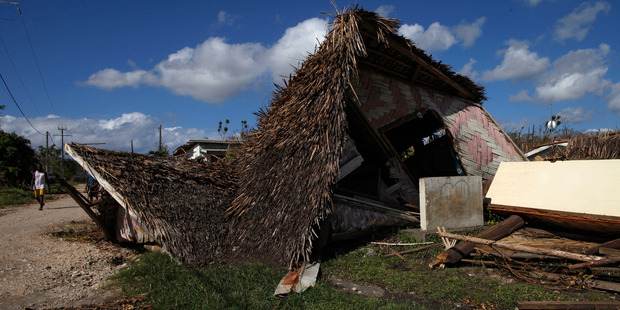 The first aid planes arrived to find scenes of “utter destruction” on the Vanuatu island of Tanna, where residents are in desperate need of emergency supplies four days after taking a direct hit from Cyclone Pam.

Entire villages were destroyed on the 550sq km island, which has a population of about 29,000, and was the first hit by the cyclone. Concrete structures were flattened and trees uprooted.

At least two people on the island are dead. One was hit by bricks while he was trying to move to another house. The other was struck by roofing iron.

When the Herald arrived in the village of Lowamilo on a plane carrying aid workers, another plane from Vila had brought the body of a person back to Tanna, where they were from. It was met by screaming, wailing people before being put on the back of a truck.

Villagers in the middle of Tanna had huddled together as the cyclone bore down, running from house to house as each one was destroyed.

Rosaline Umpkon, who is six months pregnant, told the Herald: “I felt physically heavy. I couldn’t run. My stomach was very, very sore. I thought I was going to die.”

Her house is now a pile of rubble.

One villager said she cried for two days after her house was destroyed.

Telecommunications were still down on the island last night with only satellite phones working.

Two engineers had arrived to restore the local network, Digicell.

Aid workers from World Vision, Red Cross and Tear Fund were among those who arrived yesterday.

Kiwi Tear Fund worker Andrew Finlay said: “This is definitely the worst disaster and cyclone to hit Vanuatu. I’ve been talking to people who were here for Cyclone Uma in 1987 and this is worse. We were talking to people who thought this is the end, they were running from one house to the next.”

He said the island was “looking at a few years” before agriculture would be back up and running.

“Just severe devastation everywhere you looked. The trees were stripped bare, broken branches everywhere, and many of the homes we saw were completely destroyed.”

The delivery of desperately needed emergency supplies was delayed today as two New Zealand Air Force relief flights bound for Vanuatu were forced to turn back to Auckland due to technical problems.

Both had to turn back to Auckland.

The Air Force was working towards rescheduling the flights.

– Remember, if you wish to help with the aid projects underway in Vanuatu, click on one of the following links: