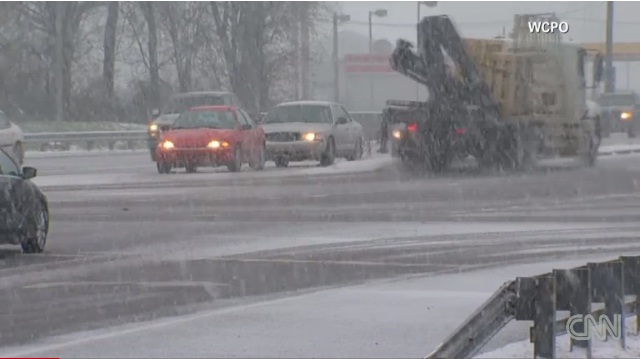 A frigid winter storm system that put Dallas in the deep freeze is hitting the East Coast on Sunday. Luckily for those people, it should be a short visit.

Snow, ice or freezing rain will fall on Washington, Philadelphia and New York City on Sunday, the National Weather Service said. On Monday, temperatures will rise into the 40s and any accumulation should start to melt after the morning commute, the weather service predicts.

Folks in other parts of the country will need an extra blanket on the bed as unseasonably cold weather will continue. And some people in the Gulf Coast and Southeast states will see heavy rain.

On Sunday, temperatures are expected to reach only about 10 degrees in the northern and central Rockies, the northern Plains and the upper Midwest. Sleet and freezing rain are forecast from the Tennessee Valley to the mid-Atlantic region.

The heaviest snow will fall across the central Appalachian Mountains, the weather service said. Some areas of the mid-Atlantic and the Northeast will see as much as 3 inches of snow.

The weather was causing delays at some of the nation’s major airports, especially for inbound flights. Arrivals to Philadelphia International Airport were backed up by an average of 100 minutes, according to the Federal Aviation Administration’s website. Kennedy airport in New York had delays of nearly one hour, as did Chicago’s O’Hare.

The Twitter account for Reagan airport in Washington said there was a temporary halt of flights as crews treated runways. It advised passengers to check with their airlines on their flight status.

NFL fans in several outdoor stadiums had to put on extra layers.

The Pittsburgh Steelers PR team tweeted out a photo of a snow-dusted field as the team prepared to play Miami.

In Philadelphia, it was even worse as flying flakes made it difficult to see, and then blanketed the playing surface.

Parts of Texas, the upper South and the Midwest socked by the winter storm will warm up just a little bit. The weather service said the temps will rise into the high 30s and 40s, but drop below freezing again Sunday night.ice storm slams southern states

How cold was it? On Saturday, Southern Methodist University offered free tickets for its football game with Central Florida but didn’t get many takers. All but a few seats in the stadium were empty.

At least seven people have died in storm-related incidents, with the Texas State Patrol reporting two weather-related fatalities on Saturday but providing no details.

In Lewisville, about 25 miles north of Dallas, the driver of a pickup lost control on an icy road, spun out of control before dawn on Saturday on a road over Lake Lewisville, went over a guardrail and landed in the water. Firefighters dove into the frigid water and towed the truck to the bridge. The unidentified driver died.

A passenger was killed Thursday when a vehicle lost control and crashed into another car in Hockley County, the Texas Department of Public Safety said.

In Arkansas, a man was killed late Thursday when a tree fell on his camper in Pope County, the Department of Emergency Management said. Highway Patrol officials in Oklahoma blamed at least one death, in Muskogee, on the weather.

In New Mexico, one person died when a semi crashed near Clines Corners.

The storm took a toll on travel, causing hundreds of car crashes and forcing the cancellation of hundreds of departures at the Dallas/FortWorth International Airport. The FAA said Saturday operations had returned to normal. Abandoned cars littered the interstate outside Dallas.

Winter came much earlier than usual in many sections of the nation.

Farmersburg, Indiana, recorded up to 10 inches of snow Thursday and temperatures fell into the single digits at night. “This was early for us to have this much measurable snow late in the fall, but has happened before,” Mark Ivy told CNN iReport. “It is more the cold that is unusual.”

In East Kingsford, Michigan, iReporter Jason Asselin said he’s covering up with blankets to keep out the cold. “In December, our average temperatures are in the 20s,” he said. “Currently it is zero degrees outside.”

Across the High Plains and into the Great Lakes, temperatures were expected to be 10 to 35 degrees below average. The wind chill index was predicted to drop as low as 35 to 45 degrees below zero in some areas.